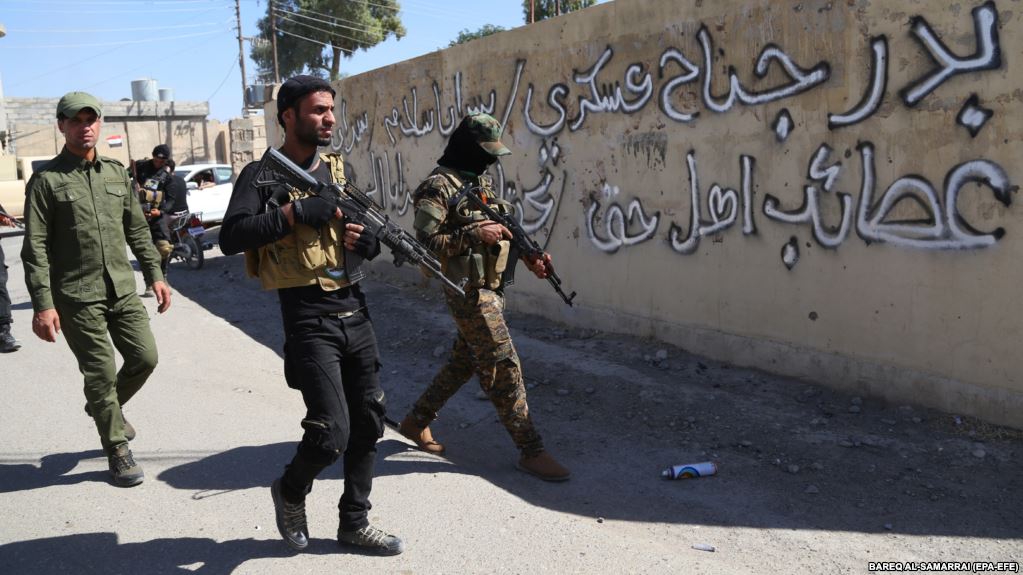 Many Iranians are upset by the presence of Iraqi paramilitary forces sent to help with flood relief efforts as they try to cope with a natural disaster called the worst to hit Iran in more than 15 years.

Several weeks of heavy rain have created torrential flood waters in nearly all of Iran’s 31 provinces, killing more than 70 people, displacing hundreds of thousands, and causing more than $2 billion in damages as the state strains to provide humanitarian aid.

Critics say the move to bring Popular Mobilization Units (Hashd al-Shaabi) from Iraq is a show of force by Iran’s Islamic Revolutionary Guards Corps (IRGC) amid discontent over what is seen as the state’s poor response to the destructive floods.

The popular criticism appears to highlight a level of distrust for the IRGC, which has also been accused in the past of using Lebanese militia to crack down on domestic protesters.

“If this is to demonstrate solidarity between the two countries [Iran and Iraq], then Iraq’s Red Crescent forces should have come, not an armed force,” Iran-based journalist Abolfazl Abedini said on Twitter.

Abedini noted that Hashd al-Shaabi and the Iranian establishment have “common interests,” while adding that “bringing the armed groups of another country for relief is wrong.”

Through the IRGC’s elite Quds Force — which is responsible for operations outside of Iranian borders — the IRGC is said to have close ties with powerful groups in Hashd al-Shaabi, an umbrella organization of more than 40 groups that has between 45,000 and 142,000 fighters.

The group was also involved in the fight against the extremist Islamic State (IS) group in Iraq.

Iranian media report that Hashd al-Shaabi’s forces will help with relief efforts in the Khuzestan and Lorestan provinces where towns and villages have been hit with high waters that have destroyed infrastructure and crops while flooding homes.

Iranian Ambassador to Iraq Iraj Masjedi was quoted as saying on April 13 that hundreds of Iraqi tribal leaders and other elites — including members of Hashd al-Shaabi — have obtained Iranian visas and gone to Khuzestan and Lorestan to help flood victims.

Masjedi said the move demonstrated “the depth of sympathy and ties between the two countries.”

The neighboring countries fought a bloody war against each other from 1980 to 1988 that was driven by Iraqi leader Saddam Hussein and led to hundreds of thousands of Iranians and Iraqis being killed.

Baghdad-Tehran relations have vastly improved since Hussein’s Sunni-led government was overthrown by U.S.-led forces in 2003 and replaced by Shi’ite leaders. Iranians adhere predominantly to Shi’a Islam.

Many people on social media have questioned the arrival of the Iraqi paramilitary forces just weeks after the head of the Tehran Revolutionary Court, Mousa Ghazanfar-Abadi, suggested that the government could use foreign militia groups — including Afghans and Pakistanis recruited by the IRGC to fight in Syria — to put down potential protests inside Iran.

“If we do not help the revolution, the Iraqi Hashd al-Shaabi, the Afghan Fatemiyoun [brigade], the Pakistani Zeynabiyoun, and Yemeni Huthis will come and help the revolution,” Ghzanfar-Abadi was quoted as saying last month in a meeting with religious students in Qom.

“Helping during floods is different than a ‘show of power’ — one is based on empathy, the second fear,” journalist Maziar Khosravi wrote on Twitter earlier this week.

Some dismissed the concern, including journalist and former political prisoner Bahman Amouee, who suggested on Twitter that the Islamic republic has “enough” repressive forces that there is no need to accuse Afghans and Iraqis of playing a role in state repression.

In an apparent reaction to the sensitivities, lawmaker Ali Sari of Khuzestan’s capital, Ahvaz, was asked in parliament by the official government news agency IRNA whether the Iraqi groups who had traveled to Iran carried military equipment.

Sari who said he had not seen Hashd al-Shaabi’s forces but that he had been informed that they were in Iran to help the flood victims, declined to comment.

“I cannot comment on this because I do not have any information,” he said.

The lawmaker also said he wasn’t aware which state body had coordinated the presence of the Iraqi paramilitary forces in Iran while adding that “usually” such decisions are made by IRGC’s Quds Force.

The semiofficial Fars news agency, which is affiliated with the IRGC, posted a video of “50 trucks” carrying aid by Hashd al-Shaabi that had crossed the border and entered Khorramshahr, in Khuzestan Province.

Fars also reported that members of the Fatemiyoun — which reportedly consists of mainly Afghan refugees from the Hazara Shi’ite minority recruited and trained by the IRGC to fight in Syria — were involved in flood relief efforts, too.

The deployment of IRGC-backed foreign forces could also be a signal to the administration of U.S. President Donald Trump, which earlier this month designated the powerful Islamic Guards as a foreign terrorist organization (FTO).

Journalist Mehdi Mahdavi-Azad told RFE/RL’s Radio Farda that the move to bring Iraqi paramilitaries to Iran is aimed at demonstrating the IRGC’s reach and influence in the region.

“I think the message [the IRGC] is sending to Washington is that we have a large network of ideological, paramilitary, armed, and militia groups in the Middle East and we can react extensively,” Mahdavi-Azad, who is based in Germany, said.

Golnaz Esfandiari is a senior correspondent with RFE/RL.EsfandiariG@rferl.org