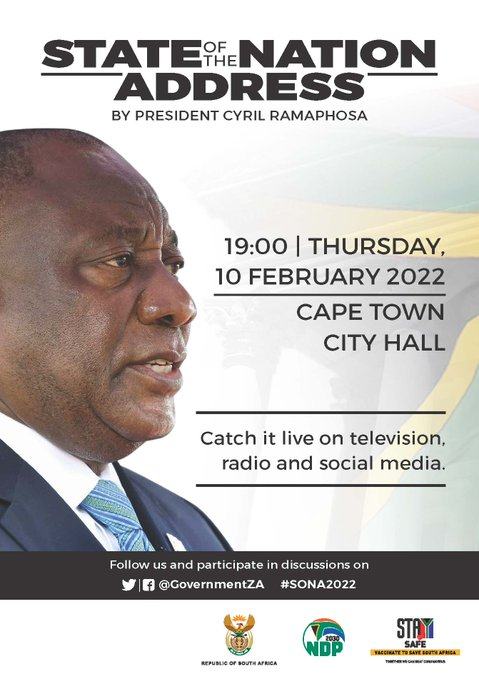 It will be an unfamiliar setting when President Cyril Ramaphosa lays out government’s roadmap when he delivers his sixth State of the Nation Address (SONA) this evening.

Apart from a limited number of Members of Parliament and guests in attendance, it will be the first time in the history of South Africa that the SONA is delivered outside of the Parliament precinct. This was after the building was gutted in a devastating fire in January.

As a result, this year’s instalment of the annual event will be delivered from the Cape Town City Hall, which, until 17 February 2022, falls under the control of Parliament, as per the definition of the precincts of Parliament, provided for in Section 2 of the Powers, Privileges, and Immunities of Parliament and Provincial Legislatures Act.

The SONA is an annual message delivered by the President of South Africa to a joint sitting of the two Houses of Parliament – the National Assembly (NA) and National Council of Provinces (NCOP).

When he begins his address at 7pm, President Ramaphosa is expected to address a raft of challenges that the country grappled with over the past year and how government sought to navigate these.

Among the things President Ramaphosa is expected to shed more light on are government’s response to the COVID-19 pandemic and progress on the Economic Reconstruction and Recovery Plan, which puts the creation of jobs at the heart of economic recovery.

During the address, the President also speaks to political, economic and social issues and the general state of South Africa, as well as its relations in Africa and abroad.

The address is also a rallying point for the entire nation to work together in turning around the economy, end gender-based violence and tackle the triple threat of poverty, inequality and unemployment.

In accordance with Level 1 COVID-19 regulations, the National Assembly in the chamber will be represented by 238 MPs. Of these, 138 will be from the African National Congress, 50 from the Democratic Alliance; 26 from the Economic Freedom Fighters; eight from Inkatha Freedom Party; six from Freedom Front Plus and two from the African Christian Democratic Party. The remaining eight smaller political parties, namely the UDM, ATM, GOOD, NFP, AIC, COPE, PAC and AL JAMA-AH will each be represented by one MP.

Former Presidents, former Presiding Officers, SADC-PF President, Dean and the Regional Deans of the Diplomatic Corps and Secretaries of Provincial Legislatures are among the dignitaries invited for physical attendance.

President Ramaphosa will be ushered into the chamber by Imbongi Mosimanegape Jeremiah Jason, who will recite his poem in SeTswana.

The SONA will be broadcast live on radio and television. It will also be streamed live on the Parliamentary website, Parliamentary television on DSTV channel 408, and Parliament’s YouTube channel.

Parliament on Tuesday said the satellite feed of the proceedings will be provided to all broadcasters and other multimedia platforms.

The National Joint Operational and Intelligence Structure (NATJOINTS) this week said security forces have been deployed and are on high alert to ensure that the SONA takes place in a secure environment, with no incidents of crime before, during and post the event.

It emphasised that those who are not accredited or authorised to be in attendance should avoid the area around the Cape Town City Hall on Thursday.

On Tuesday, Parliament said SONA day carried a bill of R1.9 million. The figure will rise to R4 million when the three days of debates were factored. This was due to Parliament having to set-up the required wall-to-wall ICT, furniture, catering as well as interpretation facilities at the Cape Town City Hall. – SAnews.gov.za

South Africa is in a state of drift: the danger is that the ANC turns the way of Zimbabwe’s ZANU-PF