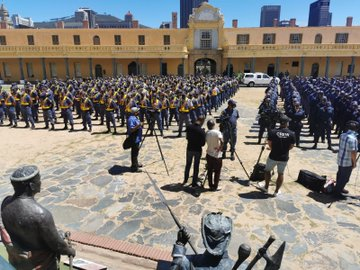 Law enforcement agencies deployed for tonight’s State of the Nation Address (SONA) have been urged not to hesitate to enforce the law should any unruly or criminal behaviour rear its ugly head during and after proceedings.

Police Minister Bheki Cele made the call on Thursday during a parade outside the Cape Town City Hall, the venue for the 2022 SONA. President Cyril Ramaphosa will at 7pm deliver the annual speech at the city hall after large sections of Parliament were gutted in a devastating fire in January.

Members of the SAPS and other security forces have been deployed in and around Cape Town, to ensure the safety and security of the event on Thursday evening.

“You have that Constitutional obligation of enforcing the law. I just hope that there will be very less that will force you to enforce the law. But if needs be, don’t hesitate to respond with speed, don’t hesitate to protect all inhabitants that will be here. Protect life, protect property and make sure that everything goes accordingly.

Emphasising his call, Cele urged the officers to be “kind, but very firm”.

He urged invited Members of Parliament, politicians, visitors and guests to behave, saying this would make life easy for the police.

“We are not going to lie down and allow people to walk over us. But don’t start the war. But if anybody starts anything … remember that you have a right to enforce the law. You uphold it and enforce it.”

The City of Cape Town handed the City Hall to Parliament on 1 February. Subsequently, Parliament handed over the building to the SAPS for its safety.

“It remains your obligation with your colleagues… that you would walk in unison to protect and save and to make sure that the people of South Africa that will be here, … are safe and protected.”

He said there had in recent times been a spate of incidents which made South Africans question the level of safety and security in the country.

The Minister said the officers were deployed to assure the safety of the public.

Ensuring safety, he said, should go beyond the SONA.

On SONA, he said officers needed to be courteous to the visitors that will be in the City Hall.

“Be nice to them as yourself you need to uphold the law. But remind them that as we are nice to them, they should be nice to you,” he said.

However, he told the officers to make the public aware that law enforcement enforces the law should any crime be committed.

He thanked the officers in advance for the work they will be doing on Thursday evening, saying police were under strict instruction to make the precinct safe and not fall victim to any crime.

“Continue to do that. When the time comes when the President speaks, be around and make sure that life is safe for all of us. Thank you very much. Now you will have to go and wait and make sure that you make all South Africans safe and feel safe,” he said. – SAnews.gov.za

South Africa is in a state of drift: the danger is that the ANC turns the way of Zimbabwe’s ZANU-PF

Ramaphosa appears – finally – to have his grip on South...