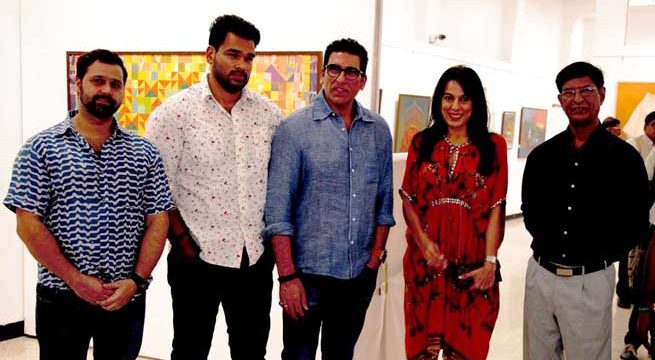 From pointillism to figurative works to graphic-collage works with canvas on plywood that can be equated to inlay work, artist Padmanabh Bendre in three decades has reinvented himself at every step. The current exhibition titled Timeless Space brings to life, the works of the veteran artist across 30 years, with his current works taking centre stage. Pooja Bedi, Mukesh Rishi and Raghav Rishi inaugurated the show while other guests included singer Mudasir Ali and artists Devyani Pareek, Vishwa Sahni, Gautam Mukherjee, Sonu Gupta. The veteran painter’s wife Shraddha Bendre, son Chirayu Bendre and daughter-in-law Sonia Bendre were also present at the do that was held at Jehangir Art Gallery, Kala Ghoda.

An interesting technique invented by Bendre who is incidentally also an architect and town planner by qualification, the current series are result of painstaking work. First, the artist creates his layered works on canvas. Then he cuts them and from three to four paintings, lets the triangles and squares create their own colour-co-ordinated spaces and emerge as unique forms on plywood. For, Bendre finds great excitement in communicating through the element of graphic forms, complete with negative and positive forms and spaces.

An avid golfer for the last two and half decades, Bendre seeks his inspiration from the nature and the vast expanse of the lush greens, an unending motivator for both his passions – golf and art. Each work of Bendre takes a minimum of three weeks of painstaking work, if not more. And start from 18” x 18” and can go up to 7 ft x 3 ft. “My works are not pre-planned. I simply piece them together from the colours that are layered and they speak a language of their own,” says Bendre, who admits that this was merely an experiment with art that made him evolve. And that it found takers in likeminded architects and interior designers is merely incidental.

“As an artist, you merely create and enjoy the process. When people love it, you feel good,” says Bendre simply as he begins experimenting on his next series with enamel on copper.