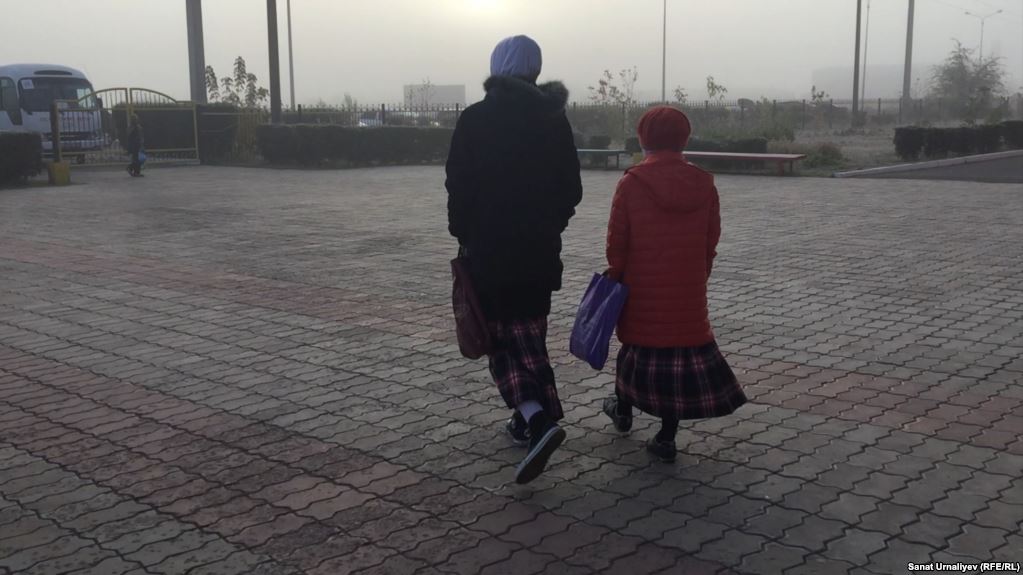 Thirteen-year-old Gulsezim Samat hasn’t attended classes since mid-October, when she was told to remove her head scarf before entering her school in the Kazakh village of Chapaev.

The school in West Kazakhstan Province, like all educational institutions below university level in the country, is enforcing an official decree by the Education Ministry that bans the wearing of religious symbols in schools.

The January 14 decree made school uniforms compulsory, and effectively barred Islamic clothing such as the head scarf, or hijab. The policy has been enforced as of September 1, the beginning of the academic year.

While many students in the Muslim-majority country have complied and removed their head scarves, a small number of parents in West Kazakhstan Province are demanding that courts revoke the ban, claiming it is unconstitutional. Similar demands have come from parents in the provinces of Mangistau, Aqtobe, and South Kazakhstan, among others.

As court trials await, dozens of female students across the country who have refused to abide by the measure have been out of school for several weeks.

In Samat’s school in Chapaev, 16 of the 20 female students who wear head scarves are complying with the new regulation, local officials say. Four others, including Samat, are not.

‘Just A Piece Of Cloth’

The new regulation was discussed during meetings with a parent committee before its implementation began, says Tlekkabyl Gabdushev, deputy governor of the district of Akzhaik where the Chapaev village is located.

He says the female students who agreed to remove their head scarves “are coming to school, studying, playing, without any problem.”

Samat’s father, Berikbek Samat, who works at the same school as a physical education teacher, is adamant that his daughter not comply with the ban.

“A head scarf is just a piece of cloth,” he says. “It doesn’t hinder studying.”

Berikbek Samat, a school teacher from Chapaev, with one of his daughters, whose older sister is currently not attending school because she can’t wear a head scarf to classes.

Berikbek Samat claims that his wife, a Kazakh-language teacher, can’t get a job “because of her head scarf.”

Berikbek Samat’s wife has been unemployed since the evening school where she worked was closed down, he says.

The 34-year-old father of three says he works as a cab driver after his day job finishes to make ends meet.

It’s unclear how many Kazakh students have stayed away from school owing to the measure, but education officials say that many parents who initially refused have since complied.

According to the city education department in Oral, the capital of West Kazakhstan Province, only 40 of the 112 hijab-wearing students in the province agreed to remove their head scarves.

The department says it will fine parents for noncompliance, and that repeat offenders will be referred to judicial authorities.

“No one has been fined so far, however” says Svetlana Bakhisheva, the head of the provincial education department.

In the western city of Zhanaozen about 60 girls, most of them primary school students, stopped going to schools for at least two weeks in September after they were told to remove their head scarves.

Zhanaozen education officials do not believe the measure singles out conservative Muslims.

Tattimbet Zhumagaliev, the head of the Zhanaozen education department, points out that 58 female students were not allowed to enter school buildings “because they were wearing miniskirts,” which is also a violation of school-uniform rules.

On November 15, a court in Astana began hearing a lawsuit filed by a group of parents from Aqtobe Province who demanded that the court overturn the Education Ministry’s ban on head scarves.

In 2011, eight female students in Aqtobe successfully sued a university over its hijab ban.

Kazakhstan’s constitution guarantees the right to practice any faith freely and without restriction.

Kazakh officials have increasingly expressed concerns about the threat of religious groups. The government blames “radical religious movements” for a deadly attack on an Aqtobe gun shop and army unit in June 2016.

In April, President Nursultan Nazarbaev, who has ruled the country since 1989, said the country needed a legal ban on certain Islamic clothing, such as garments that cover the body from head to toe and so-called Salafi-style ankle-length pants for men.

“The number of Kazakh girls who are fully covered with black clothing is on the rise,” Nazarbaev said, adding that the trend was “incompatible” with Kazakh traditions.

“Kazakhs wear black garments only for funerals,” Nazarbaev said, but he made no mention of banning others forms of Islamic clothing worn in Kazakhstan.

Kazakhstan’s official school uniform for girls consists of a “classic-style blouse” worn with a skirt or ankle-length pants. The color of the uniform and skirt length is decided by individual school administrations and requires official approval by parent committees.

While the decree on uniforms does not specifically mention headwear, it does not allow religious symbols to be worn with the uniform, which would rule out the hijab.