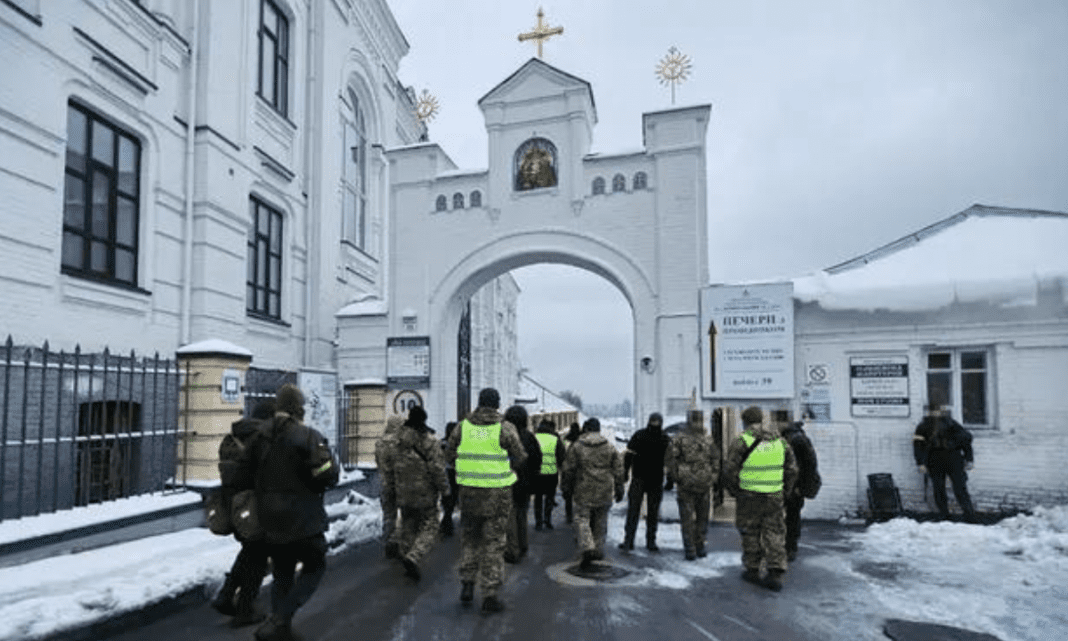 Ukraine’s SBU security service and police have raided a 1,000-year-old Orthodox Christian monastery in Kyiv to counter suspected “subversive activities by Russian special services”. Located south of the city center, the sprawling Kyiv Pechersk Lavra complex – or Kyiv Monastery of the Caves – is the headquarters of the Russian-backed wing of the Ukrainian Orthodox church that falls under the Moscow patriarchate, as well as being a Ukrainian cultural treasure and a Unesco World Heritage site. The Russian Orthodox Church, whose head, Patriarch Kirill, has strongly supported Moscow’s military actions in Ukraine, condemned Tuesday’s raid as an “act of intimidation”.The Security Service of Ukraine (SBU) said in a statement “These measures are being taken … as part of the systemic work of the SBU to counter the destructive activities of Russian special services in Ukraine.

”It said the search was aimed at preventing the use of the cave monastery as “the center of the Russian world”. It carried out to look into suspicions “about the use of the premises … for sheltering sabotage and reconnaissance groups, foreign citizens, weapons storage”. The “Russian world” concept is at the center of Vladimir Putin’s new foreign policy doctrine that aims to protect Russia’s language, culture, and religion. Conservative ideologies used it to justify intervention abroad. The SBU did not provide details of the outcome of Tuesday’s raid, where armed officers were seen conducting ID checks on him and examining his pockets before allowing believers in. On Tuesday, the SBU, police, and the National Guard also raided two of his other monasteries in western Ukraine and the headquarters of the Moscow Patriarchate, he said in a statement posted on Facebook by the SBU’s Rivne regional branch. said The raid will further exacerbate already strained relations between Russian and Ukrainian Orthodox Christians.

The Kremlin denounced the searches as the latest chapter in Kyiv’s “war” against the Russian church. “Ukraine has long been at war with the Russian Orthodox Church,” the Kremlin spokesperson, Dmitry Peskov, told reporters. “We could see this as yet another link in the chain of these military actions against Russian Orthodoxy.” Vladimir Legoida, a spokesperson for the Russian Orthodox Church, said: “Like many other cases of persecution of believers in Ukraine since 2014, this act of intimidation of believers is almost certain to go unnoticed by those who call themselves the international human rights community.”The war has sharpened the split between Ukraine and Russia’s Orthodox churches and intensified a long-running feud over religious allegiance. The Ukrainian Orthodox Church formally split from under Moscow’s leadership three years ago, with Russia losing multiple Ukrainian parishes, but many historic churches and monasteries have remained loyal in religious practice and political allegiance to Russia.

Last Friday, the SBU said it had charged a senior clergyman from the western Vinnytsia region with attempting to distribute leaflets justifying Russia’s invasion of Ukraine. In May, the Ukrainian Orthodox Church of the Moscow Patriarchate cut ties with the Church of Russia, citing support for what Moscow calls a “special military operation” rather than a war of aggression. A 2020 poll by the Kyiv-based Razumkov Center found that 34% of Ukrainians identify themselves as members of Ukraine’s central Orthodox Church, while 14% are members of the Ukrainian Patriarchal Church in Moscow. I found out. In 2019, Ukraine received permission from the world’s Orthodox Christian spiritual leaders to establish a church independent of Moscow, ending centuries of religious ties between the two countries. In early November, the Ukrainian Orthodox Church announced that it would allow church members to celebrate Christmas on December 25, away from Russia and the West for the first time. They were born on the Julian calendar. The Dec. 25 move marks the beginning of Putin’s 2014 annexation of Crimea and provoked a pro-Moscow rebellion in the East Donbas region, to dismantle the symbols of Russia, the Soviet Union, and communism. It was seen as part of a larger national process.