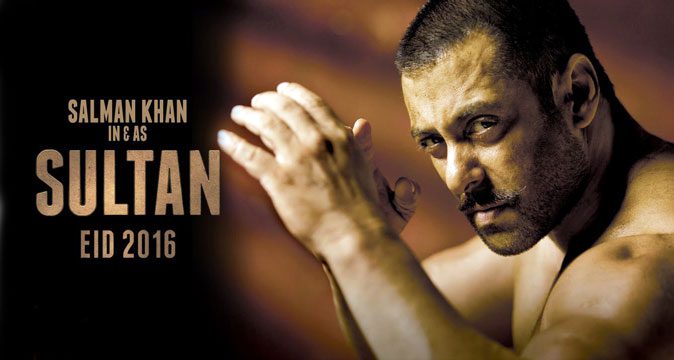 This man is a maverick to the core. His mercurial nature, his wisecracks and his mood swings are all now part of Bollywood folklore.

He is also controversy’s favourite child. He speaks his mind out a tad to carelessly for a public figure and someone who has thousands rising to support him in every case –  be it about black-buck killing, the accident case or the recent story about him using the ward rape, carelessly in a media interaction.

But then Khan manages to connect to people when he speaks. No wonder that the 50-year-old actor now rules the roost in Bollywood with every film of his proving to be a box office juggernaut.

Excerpts from an interview.

The character in Sultan required you to be in two different shapes. Also Aamir Khan has a similar physical change in his film Dangal. How did you get into the physicality of the character?

Acting sometimes is easier. But looking like a character like Sultan is a rather tough process. You need to be trained in a manner similar to how the wrestlers are trained.  Aamir Khan and my training for our respective roles is perhaps even tougher than what the wrestlers themselves have gone through because we had to do in a few weeks what they have done in a few years. It wasn’t a crash course. It was physically tough because we needed to look good enough to look like wrestlers who can fight in the ring and match their steps.

Can you elucidate the kind of training that you underwent for Sultan, say like what else apart from the wrestling moves?

To begin with, it all started with weight training. Then it was about the moves and getting them perfectly so that I do not look like an actor doing them, but make the audience feel that this man is not a fraud. I spent around three hours every day. The film sees me fight in the akhadas in the village to the mat based rings and finally move on to the Mixed Martial Arts (MMA) arena. The transition is also a very important part of my character. Hence things like punching and kicking also had to be perfected.

How tough was it?

I was shooting six hours only for these sessions because they were physically excruciating. It was about picking up someone around 270 pounds in weight every time and pounding him to the ground. It was a mix of lift and trust. This had to be done many times because there were no multiple cameras and I had to do that ten times over and over again to ensure that the film director got his angles covered. Similarly, I had to then be lifted and thrown down as many times the director wanted. When you are actually fighting in the ring, you only do it once. But you need to work harder for the movies.

How did the director guide you?

Well, the fact is that my director knows movies, but he doesn’t know about weight training. I would eat and then, head right back to training. Every 20 days, he would ask me to look different than what I did before. So depending on what he wanted to shoot, I kept putting on weight bloating away to glory or lose weight for the next schedule. This went on and on. I really wish that the director Ali Abbas Zafar had gone to the gymnasium once in his life. I do not think he ever has. Every few days he wanted a different body type.

When Aamir did Dangal, he shot first with a large body and post a few months, he lost weight and has started his second schedule. Not with me though. Here, I was… shooting, dieting, eating, shooting, dieting…

Do you want to continue this kind of training after the film also?

No. Physical exertion of this sort has no meaning today unless someone really loves doing it for the sake of fun. As for actors, there is something called technology that helps fix a lot of things. What is important is a great script and if you have one like what Ali has in this film and execute it the way he has done, it will be a winner. Sultan is a great story of an underdog.

Has your father seen the film?

Yes. He has he liked it a lot and he also liked Anushka Sharma a lot in the movie.

Your character also needed to master a dialect. Haryanvi is the language of the central character. So any different schooling there for the dialogues?

No way. I had a guy on the sets who would read the dialogues out and I would merely repeat them with the required tonality and accent. Honestly, I had no time to learn the language. Aamir had enough buffer time and he learnt it well. I cannot speak Hindi and English properly, where will I learn other languages. My mother is a Maharashtrian, but I cannot even speak Marathi. I can talk enough to communicate correctly in whatever languages I know and I am happy.

What was the last thing that you learnt?

Well, I am learning to sing a bit but I have already started singing in the movies. I wanted to learn to act and I got movie roles then. I am being pushed into the well and then asked to swim. That was what actually happened the first time I swam. I was back at my hometown in Indore, when some cousins of mine wanted to fool around with me. I was just eight years old then. They asked me if I knew to swim. They knew that I was a city slicker and decided to teach me.

Their idea was to tie a rope around me and push me into a 30 feet dark well. I met some fish, a turtle and snake as well. Well, there I was in the well and learnt swimming that way. The rest of the life has also been like that.

There was a controversy stating that a non-sportsman like you should not be a brand ambassador for India for the Olympics? We know that you are good in swimming and shooting as well.

I wish the controversy had meandered for a while longer. People who had a problem with me complained that I’m not even a sportsman. Well, I wonder what that meant? Did anyone bother to find out what I have done before in my career? I have certificates in swimming thanks to what my cousins taught me. So I am technically a sportsman.

Also, I want to add that I got to know that many years ago, I had actually been selected for a state qualifier in air rifle shooting. But then I didn’t know it till once day recently Indian shooter Gagan Narang told me on a flight that I had qualified for the state once. The qualification was held at Chetana College, Bandra. I’d gone there without gear and equipment. I fired 50 shots in 50 minutes and walked out, unaware that I had qualified. The requirement is 60 shots in 1 hour 20 minutes. But then my situation is a little complicated now. I have that hunting case (black buck) going on.

Isn’t Salman Khan working harder at his roles and movies, even though he is 50 now?

When someone becomes successful, he or she has to start working harder to maintain the success. One cannot become complacent. I was looking at one of my older films the other day and I was shocked to see a pathetic looking close up of mine. I wondered why would people pay money to see me if I didn’t work hard? Movie tickets are priced very high and fans want to see the star. You have to work hard to give them their money’s worth. That is why I need to torture myself into looking like the guy they want to pay money and watch. Films are for their entertainment and they should say ‘paisa vasool’ at the end of the day.

Your movie Sultan was slated to take on Shah Rukh Khan’s Raees at the box-office in July. What happened?
Shah Rukh’s film wasn’t ready to release. There is some work pending in his film. Thankfully this happened else both of us would have ended up losing business because of ego clashes between producers. We would have had no choice but to share the collections and be at a loss – like it happened with Bajirao Mastani and Dilwale earlier this year. Long back we used to have movies like Dil and Ghayal hitting the screens together and yet becoming hits together. We can’t do that today.

What is that you fear losing the most?

I fear losing love and respect. That is what we strive for. And then there is something like stardom. I will not lie stating that I do not care. Yes, I do care. When one loses his stardom, they wonder where they went wrong. You need to be man enough to be able to take that. My father went through it twice in his life. I have gone through it. But then, you have to realise that life is more than being a star and hero in the movies.
Do you think that a controversy can help a film get business?

None of my controversies have ever helped my movies get business. Go to the cops and the court if you find any of our work objectionable. Why attack theatres if you are enraged with something that a star has done?

Raveena Tandon , asks why Madhuri Dixit is called a ’90s...