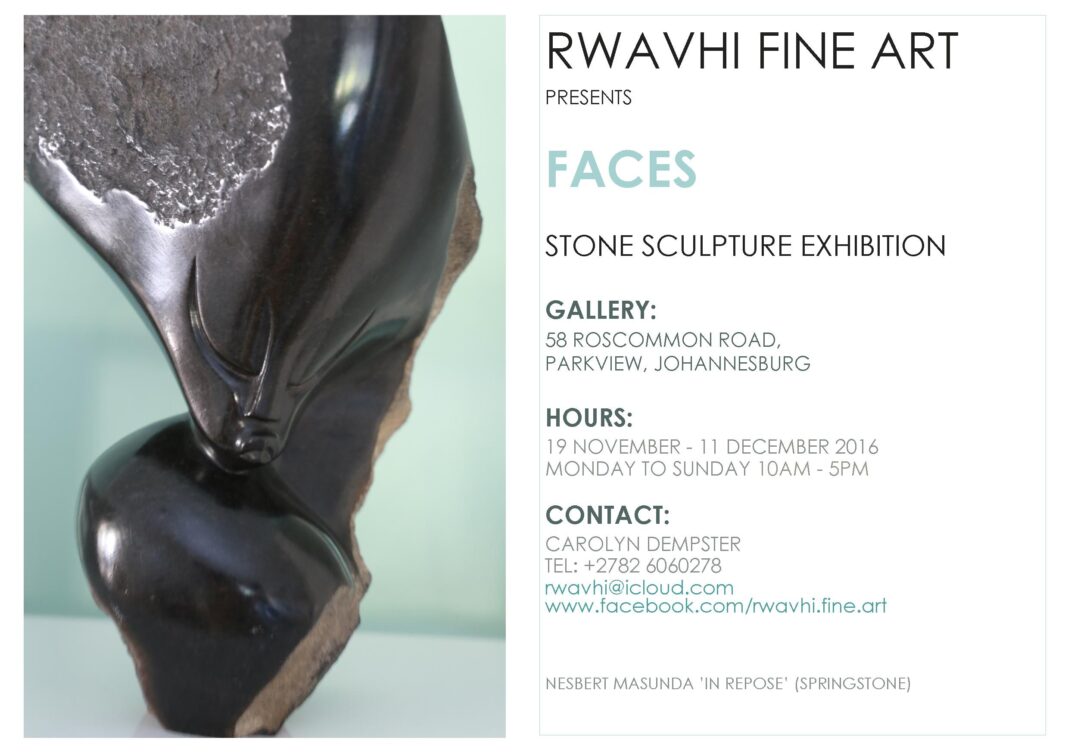 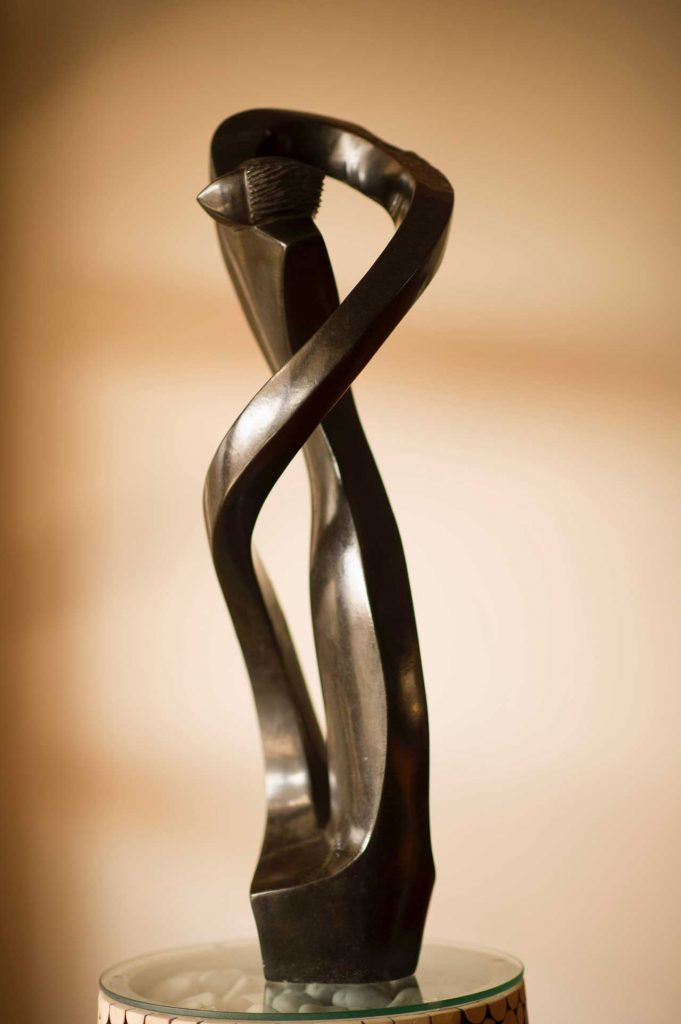 Faces tell a thousand stories. Faces can tell a thousand lies. The stone sculptors of Zimbabwe have the artistic ability to carve a face out of rock in a myriad different ways, be it human, spirit, fish or fowl. It is a skill that has been centuries in the making.

The annual exhibition in this indigenous garden and home gallery will be open to the public daily between 10am & 5pm, from 19 November – 11 December 2016.
Over the past decade, Zimbawe’s artists have had to endure political turmoil, economic upheaval and great hardship. In the face of this they have used the medium of stone as a crucible for their creative energies, carving their imagination and vision into sculptures that are powerful, moving and transcendent.

Among internationally established artists featured in this celebratory exhibition are works by Charles Nembaware of the Svikiro Sculpture collective, Peter Makuwise from Nyanga, Nesbert Masunda, who apprenticed under the late great Nicholas Mukomberanwa, a founder member of the sculpture movement in Zimbabwe, Walter Mariga, 2016 resident artist at the Rice Lake gallery in Canada, and Lovemore Bonjisi who is widely recognised as Zimbabwe’s modern-day ‘Michelangelo’.

Visiting guest artist Authur Manyengedzo will be present at the gallery to answer questions about the Shona sculpture movement, and to guide visitors around the exhibition until 28 November. Manyengedzo has an international reputation as an accomplished Third Generation sculptor, and his work is highly sought after in the United Kingdom, Canada and Germany.

All of these internationally established sculptors are widely acknowledged as some of the finest carving by hand in stone in the world today. Zimbabwe is one of the few countries in Africa that has large deposits of Serpentine stone suitable for sculpting. The stone ranges in hardness, and in colour, from black to light blue, yellow and green. The stone itself is between 50 and 300 million years old, some of the oldest rock on the planet. 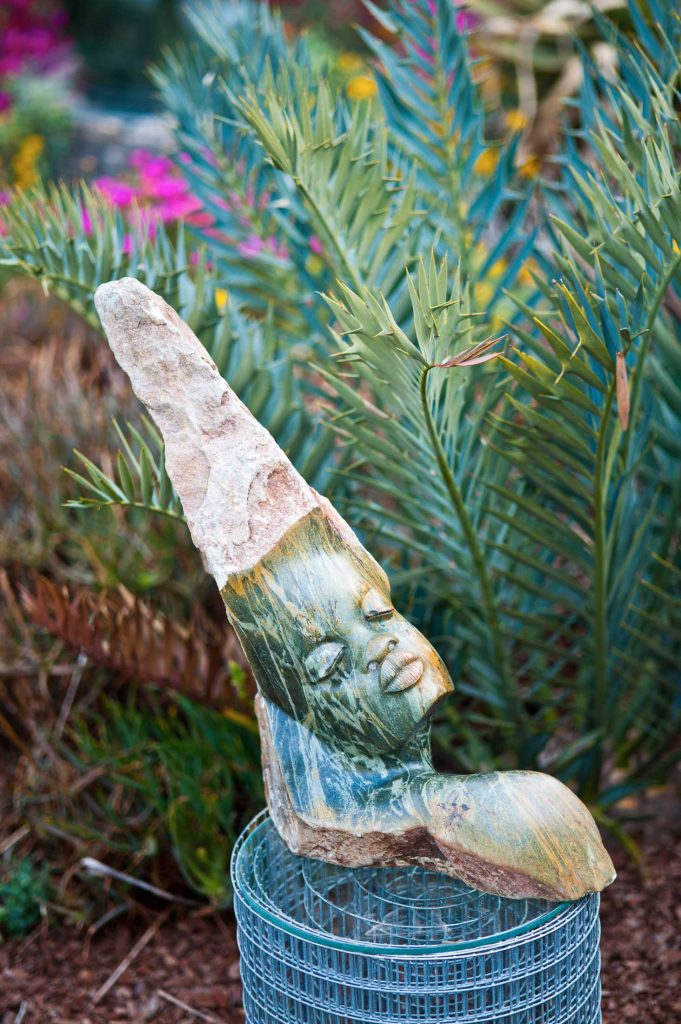 The ancient tradition of stone carving in Zimbabwe dates back to the 13th century. The totemic bird sculptures and ruins of Great Zimbabwe are evidence of the stonemasonry skills of the great Shona empires (AD 1250 – 1450). The tradition of stone sculpting was rekindled in1957 when the then curator of the National Gallery of Zimbabwe, Frank McEwen, invited hardwood sculptors from the mountainous Nyanga region to come to a workshop at the gallery in Harare. There, the Zimbabwe sculpture movement was re-born. McEwen, through his personal friendships with Picasso, Bracque and Leger showcased Shona sculpture in Paris, London and New York in the 1960’s and 1970’s,

The early sculptors – Joram Mariga, Bernard Matemera, Nicholas Mukomberanwa, and others are known as the ‘First Generation’ of stone sculptors. Their work has been compared to that of the great 20th century sculptors of the Western World; Auguste Rodin, Constantin Brancusi and Modigliani.

Few of Zimbabwe’s stone sculptors have had the benefit of any formal art training. The First Generation artists looked to their traditional culture for inspiration. Because the majority of the sculptors were Shona, the art movement was initially known as the ‘Shona Sculpture movement’. Now however, there are a number of sculptors from Malawi, Mozambique and Zambia also working in stone, and they have enriched the movement with their cultural input. Today it is a distinctly modern art form that takes inspiration from contemporary life and politics as well as traditional and spiritual beliefs.

Some techniques of physical fitness.

Improve your health with some tips. part 2

Improve your health with some tips. part 1

North Korea aims to have the ‘most powerful nuclear power plant...