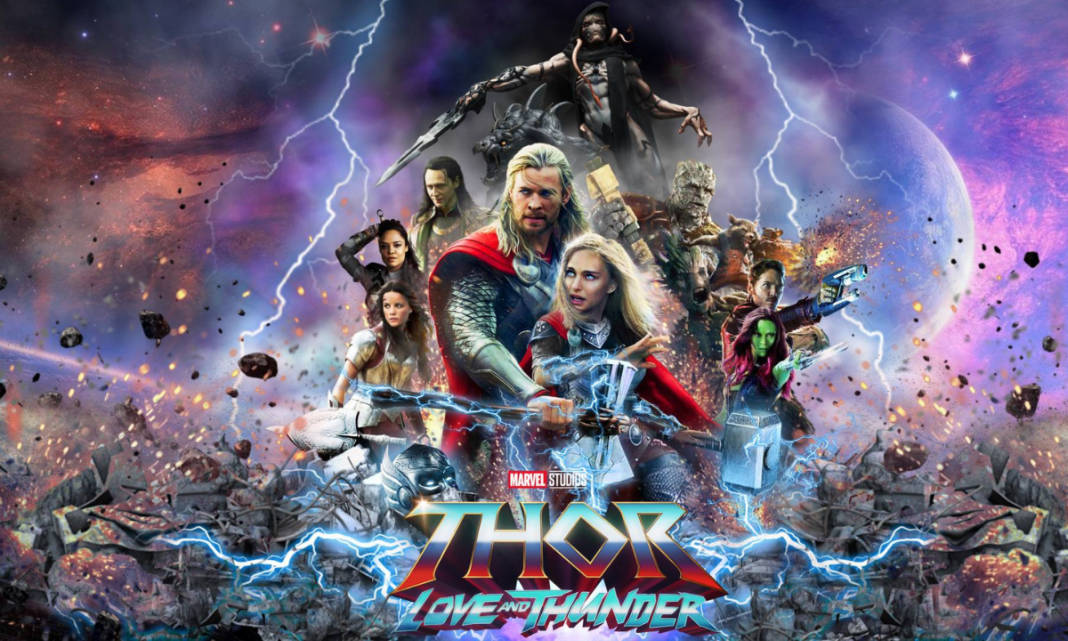 “Thor: Love and Thunder” is more or less a victory lap for all that director Taika Waititi achieved with his previous Marvel film, the often hilarious, rousing, and refreshing  And while it has too many familiar flourishes and jokes, this entertaining sequel is still a force for good, with enough visual ambition and heart in front of and behind the camera to stand on its own. We meet our space Viking hero and thunderous Norse god Thor (Chris Hemsworth) on a path of healing. Going “from dad bod to god bod” (to quote Waititi`s voiceover recap, delivered by his still-charming rock-bodied softy character Korg), Thor has lost the gut he had in “Avengers: Endgame,” and the people of Asgard have settled into a port town called New Asgard after their home realm was trashed in “Thor: Ragnarok.” Their leader, the charismatic King Valkyrie (Tessa Thompson), has helped them acclimate to life on Earth, which includes being a tourist attraction. With assistance from the Guardians of the Galaxy in a brief appearance, Thor gets back into worlds-saving shape, and in a Guns N’ Roses-accompanied moment, in the beginning, he unleashes stylized, high-flying slaughter a la many scenes in.

“Thor: Ragnarok,” wielding his axe Stormbreaker. But he has no one to share the victory with, and for all of the hundreds of years Thor has lived, he has resigned to not finding true love. The film then introduces the more interesting heroine of Jane Foster (Natalie Portman). This was Thor`s former human love interest from previous films, in his more serious times. Love and Thunder thoughtfully bring Jane back into the action while adding depth to her relationship with Thor. Portman’s performance, both in her human state and her heroic state, conveys why it’s great to see Jane again. To stop Gorr and save the stolen children, Jane, Thor, King Valkyrie, and Korg visit the god of lightning Zeus, and the other Gods, who laze about in a golden forum and talk about the next orgy, unafraid of what Gorr is looking to do to them.

” Thor: Love and Thunder is his comedy sequel to the blockbuster, and the weaker material reminds us of it, but he’s still good enough for a laugh or two. ‘Thor’s biggest treat: Aside from how Waititi should get this “Star Wars” trilogy, he says it includes bold use of color both visually and thematically. not just eye-catching shades, but includes sequences of heroic black-and-white battles between Gore and Thor on a tiny planet where Zeus’ soldiers spit out golden blood and steal their color. This sequel is not without its caveats, but Waititi continues to show how unique these blockbusters are as long as the storyteller carries on with the heaviest and funniest ideas.

Share
Facebook
Twitter
Pinterest
WhatsApp
Previous article
BLACKPINK claims to be a ‘very normal girl’ after being named TIME’s Entertainer of the Year.
Next article
Ukraine’s new drone could be a turning point in war?
- Advertisement -

Permanent load shedding for the next two years: Eskom.