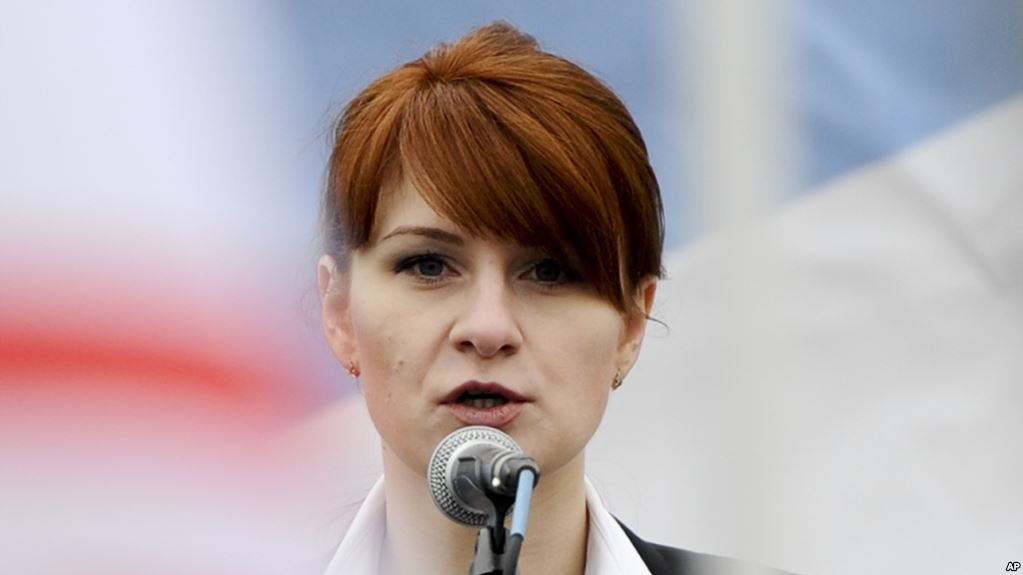 WASHINGTON — In the lexicon of U.S. counterintelligence, it’s called “spot and assess,” “access agents,” and “backchannels.” According to U.S. prosecutors, it’s also what Maria Butina, a now 30-year-old Russian graduate student, was doing during her time in United States.

“Butina was not a spy in the traditional sense of trying to gain access to classified information to send back to her home country. She was not a trained intelligence officer,” prosecutors wrote in a memo. “But the actions she took were nonetheless taken on behalf of the Russian Official for the benefit of the Russian Federation, and those actions had the potential to damage the national security of the United States.”

The assertion, made in filings in U.S. District Court in Washington, D.C., was part of federal authorities’ final arguments in their case against Butina, who is scheduled for sentencing on April 26 after pleading guilty last year to being an unregistered agent of a foreign government.SEE ALSO:

She could get up to five years in prison, although U.S. officials have requested 18 months and her subsequent deportation.

In addition to laying out the final arguments, the filings provide insight into how U.S. law enforcement and intelligence officials view efforts by Russia to infiltrate political groups, academia, business circles, and other parts of U.S. society.

“Acquiring information valuable to a foreign power does not necessarily involve collecting classified documents or engaging in cloak-and-dagger activities,” another memo included in the filing said.

Though separate from the now-concluded investigation by Special Counsel Robert Mueller, the case against Butina touched on many of the same issues that continue to roil U.S. politics: how and why Russia sought to interfere in U.S. politics in and before the 2016 presidential election.

At the heart of Butina’s case is the allegation that before and during her studies at American University in Washington she sought to build relationships with U.S. conservative political groups, including the influential National Rifle Association (NRA), on behalf of at least one powerful Kremlin-connected lawmaker.

She was charged not under the Foreign Agents Registration Act (FARA) but under a lesser-known U.S. law informally known as “espionage-lite.” That legislation targets “espionage-like or clandestine behavior or an otherwise provable connection to an intelligence service, or information gathering or procurement-type activity on behalf of a foreign government.”

In court filings, prosecutors homed in on specific projects that Butina allegedly undertook. For example, in March 2015, she is said to have drafted something called the “Diplomacy Project” with help from “U.S. Person 1” and, to carry out the plan, requested $125,000 from a Russian billionaire to attend conferences and set up “separate meetings with interested parties.”

U.S. Person 1 is widely believed to be Paul Erickson, a conservative U.S. activist identified as Butina’s boyfriend. He was charged in February with fraud in a case unrelated to Butina’s.

The filings have asserted that Butina’s main backer in Russia was Aleksandr Torshin, a former top Central Bank official and former lawmaker whom Spanish authorities have alleged has links to Russian organized crime. He was sanctioned by the U.S. Treasury Department in April 2018, three months before Butina was arrested.

Butina was “fully aware that he reported to the rest of the Russian government and her actions were ultimately for the benefit of the foreign government,” prosecutors alleged.

In their April 19 filing, prosecutors included a memo, or “declaration,” by Robert Anderson, a 20-year veteran of the FBI and former assistant director for its counterintelligence division. Aimed at bolstering the government’s arguments, the memo highlights in detail how the FBI identifies the activities of foreigners that would potentially be considered espionage.

“A spot-and-assess operation does not require secret encryption, dead drops, or any other trappings of a Hollywood spy story,” Anderson wrote.

“Butina collected information about numerous American citizens who she believed had access to and influence with senior levels of the United States government. She focused specifically on Americans with political influence and Americans who had access, or were expected to acquire access, to the incoming presidential administration. Her ability to gain meaningful access to these powerful individuals would be incredibly valuable to the Russian government,” he alleged.

“That Butina presented herself as someone with high-level connections in the Russian government but never asked potential targets to provide any confidential information or do anything obviously illegal is entirely consistent with a spot-and-assess operation,” Anderson said.

Andrew Weiss, who was a top Russia director for the National Security Council under former Democratic President Bill Clinton, said the entire filing, including with the Anderson declaration, should be viewed not only in the context of the Butina case but also in parallel to what was outlined in the Mueller report, a partly redacted version of which was released on April 18.SEE ALSO:

In it, Mueller corroborated U.S. intelligence conclusions of Russian meddling in the 2016 election that was won by President Donald Trump but “did not establish” that Trump campaign officials “conspired or coordinated with the Russian government in its election interference activities.”

“The biggest issue here is that we have a relatively small case compared to the massive set of issues raised within [the] Mueller [investigation]. And here you have the Justice Department prosecutors…outlining why what Butina did was so damaging, and then they amplify it with Anderson’s declaration,” said Weiss, who also served at the U.S. State Department and the Pentagon.

He said that mirrored what appeared to be happening in 2016 and 2017, when Russian businessmen and others were said to be trying to reach out to the incoming Trump administration — something that was documented in the Mueller report.

“The question is: Is it bad to have people who are looking for interlocutors who might be more pliable? Is it bad to have Russian figures see if Trump administration officials might be against the prevailing Republican notions of foreign policy, or policy toward Russia?” Weiss said.

When she was arrested, Butina denied the charges. She changed her plea in December and agreed to cooperate with prosecutors.\

Still, defense lawyers have strenuously fought the assertion that she was a spy, insisting that she was merely an eager advocate for improving a toxic relationship between Moscow and Washington.

In their pre-sentencing filing, Butina’s lawyers accused prosecutors of only belatedly asserting the “spot-and-assess” accusation and asked the judge to ignore it and not to let Anderson testify at her sentencing.

They asserted that the prosecutors’ memo “raises a wholly new theory of espionage activity that was never charged, never cleared by a grand jury, never disclosed, and never even raised directly with Maria during her 50-plus hours of interviews.”

Neither of her lawyers, Robert Driscoll or Alfred Carry, would comment further ahead of the sentencing.

“Anderson’s phraseology is so chilling because it shows an amazing level of Russia’s potential ability to tip major U.S. foreign policy making in a favorable direction,” Weiss said.

“How does a sophisticated adversary with a huge intelligence apparatus operate in the United States,” he added. “This is one manifestation of how they operate and it’s surely not the only one.”

Whether up in smoke or down the toilet, missing presidential records are a serious concern

A brief history of the NFL, ‘The Star-Spangled Banner,’ the Super Bowl and their tangled saga of patriotism and dissent