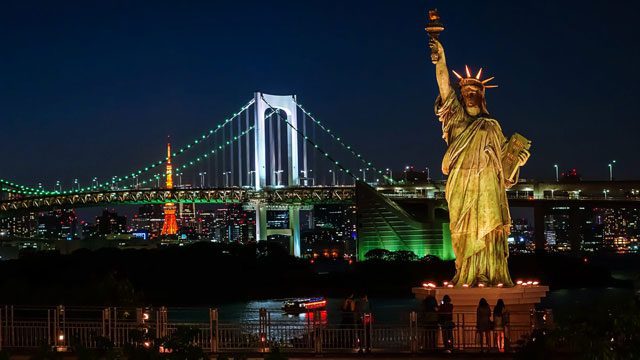 The city that never sleeps

I visited New York this summer and was pleasantly surprised by the thundershowers that came whenever the temperature threatened to soar. As some locals put it, the wife’s mood and the weather in New York – both are unpredictable.

The temperature is a warm 27 degrees and goes below that as well. It is a good time for the locals to also indulge in the Smorgasburg events as well. The parks are full of these travelling food carts and tasty inexpensive food is what one gets here. Add to that if you are a beer or a wine drinker and want to enjoy it in a public park, you can do that.

Needless to say, people who visit New York want to see the sight of the Statue of Liberty. Either you can take a boat ride close to it, hire a chopper and almost tap the statue on its head or go to the Brooklyn Bridge and watch the statue from far. You can use the zoom lens on your camera to see it close from the bridge. Getting on top of the statue is not a high anymore and has to be booked in advance.

Earlier getting on top of the Empire State Building was said to be an achievement for people who could not make it to the top of Mount Everest, but then that thrill exists no more. However, if you want to give it a shot, do it for the once in a lifetime feel. Alternative do that from the Burj Khalifa in Dubai.

The city is awake all the while and in case you start cooking late at night and realise that you are short of some ingredient, you can hop out to a supermarket and buy what you need. Many grocery stores operate 24×7.

You can also visit the Madam Tussaud’s Museum at the busy Times Square, gaze at the huge billboards that seem to talk incessantly to you or quietly go and gaze at the birds at Central Park.

Travel is cheap if you buy a metrocard to commute. A metrocard costs $ 31 and can be used innumerable times for seven days –  both in the subway as well as in the local buses. Otherwise a preloaded card without a time limit will cost you $ 2.72 each swipe.

You can take the green cabs for small distances and the yellow cabs for the longer ones. Uber also plies a lot in New York.

Interestingly most visitors to the American side of the Niagara Falls – There is a Canada side as well, which purportedly offers a better view – are Asians – mostly Indians and Chinese.

Niagara Falls is most breath-taking when you are close to being under the falls. The boat ride to the Niagara is the best possible one because you get drenched by the water from the falls as the boat in which you are travelling veers towards the falls.

No one may have given this idea to you before, but we do suggest that you should wear minimal clothing and no raincoats while getting under the falls. That’s the best part about this.