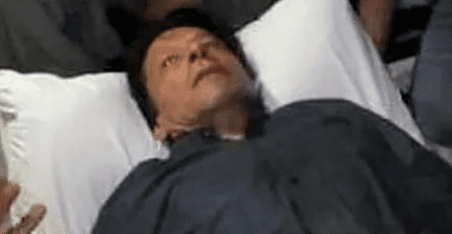 Protesters take to the streets of Pakistan after gunmen opened fire on a convoy carrying former Prime Minister Imran Khan, who was leading a march to Islamabad demanding early elections, injuring him and killing supporters. I took it out. A party adviser said the 70-year-old Khan had injured his lower leg and was in stable condition after what his supporters described as an assassination. “A man opened fire with an automatic rifle. Several people were injured. Imran Khan was also injured,” Asad Umar said shortly after the shooting. The identity of the shooter who was arrested at the scene was not immediately known. A video has gone viral online claiming a disheveled man was detained by police with his hands tied behind his back and intended to kill Khan. Video from the scene shows the shooter being knocked out by another man. He is about to fire a weapon that is purported to be a 9mm automatic at Khan. The panicked crowd scatters, with some chasing and catching the attackers.

The attack took place in the Wazirabad district of eastern Punjab, where former international cricket star Pakistan Teliku Einsaf (PTI) Party is in power. The former prime minister was heading to Islamabad in a large convoy of trucks and cars as part of a campaign aimed at getting the government to hold early elections to restore him as prime minister. Faisal Javed, a senator from Khan’s party who was injured in the incident, told local media with blood on his shirt. “One politician was killed and several political aides, including Imran Khan, were injured. He is out of danger and we are praying for him,” he said. Local reporter Zeeshan Bakhsh, who was present, told local media that initially no one knew what was happening and some thought it was fireworks. “After the first burst, I saw someone lying on the ground…it all happened in 15 seconds,” he said.

Punjab Police said seven people were injured, and Muazzam Nawaz and One of his identify have been confirmed dead.

Pakistan has a long history of political violence. Former Prime Minister Benazir Bhutto was assassinated in a shooting and bombing attack in December 2007 after campaigning in Rawalpindi city near Islamabad.

“The news we were dreading… Thank God he’s fine. And from his sons, the crowd that attacked the gunman Thank you to the heroic man in.”