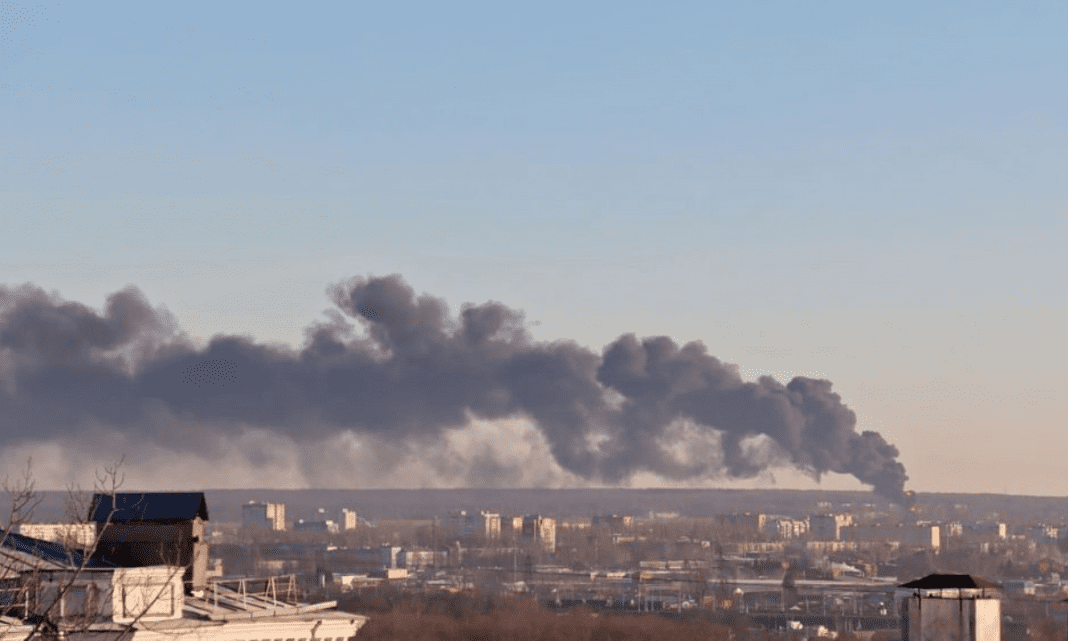 The governor of the Russian region said a drone strike set fire to an oil storage tank at an airfield in Kursk, a day after Ukraine launched a daring drone strike on two military airfields deep in Russian territory. Roman Starovoit, governor of the Kursk region, which borders Ukraine, said via the messaging app Telegram that there were no casualties in the attack and that the fires were “localized.”

Video footage posted on social media shows a massive explosion that lit up the night sky, followed by a massive fire at an airfield 175 miles (280 km) from the Ukrainian border. At dawn, a large column of black smoke could still be seen hanging over the site. There were no immediate comments from Kyiv or Moscow. Russian officials have condemned Monday’s attack on a modified Strizh drone, first manufactured during the Soviet era in the 1970s and intended to be used for shooting practice. Ukrainian attacks on Russian military targets have become more daring in recent weeks as Kyiv tried to bring Vladimir Putin’s war against Ukraine home. The Russian Defense Ministry said Monday that Ukrainian drones attacked his two air force bases in south-central Russia in Ryazan and Saratov, killing three soldiers, wounding four, and damaging two planes. announced.

Ukraine has not claimed direct responsibility for any of the attacks. But a senior Ukrainian official, quoted by The New York Times, said the drones involved in Monday’s attack were launched from Ukrainian territory, and that at least one of the attacks was carried out with the help of special forces near the base. Israeli satellite imagery company ImageSat International has shared images showing burns and objects near a Tu-22M aircraft at Diagilevo airbase in Ryazan — a deployed flying drone shot down. “It is too early to say what this is, but the ability of the Ukrainian army to reach military targets deep in the territory of the Russian Federation is of great symbolic and significant significance,” he said. wrote on the website of Federation Ukrainian Espresso TV.

The latest drone strike came as Russian officials dismissed recent claims that Moscow may be nearing an agreement with the International Atomic Energy Agency (IAEA) to withdraw from the Zaporizhia nuclear power plant. “It is out of the question for Russia to withdraw from the Zaporizhia nuclear power plant or transfer control of it to a ‘third party,'” spokeswoman Maria Zakharova of the Russian Foreign Ministry said. IAEA Director General Rafael Grossi said last week that he hopes to reach an agreement with Russia and Ukraine to protect Russian-owned nuclear power plants by the end of the year.

North Korea aims to have the ‘most powerful nuclear power plant...

The army will be stationed at several Eskom power plants.