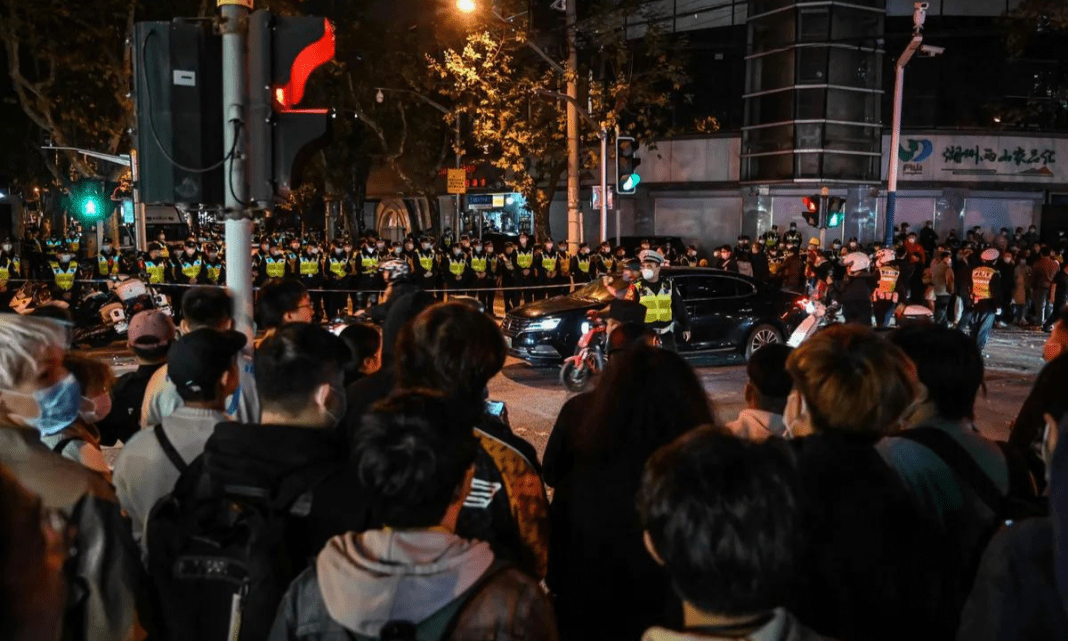 Protests against China’s tough Covid regulations have intensified as a wave of civil disobedience sparked by deadly fires in the Far West reached mainland levels since Xi Jinping took power a decade ago. At Beijing’s elite Tsinghua University, students chanted “freedom wins” and called for an end to the lockdown. Meanwhile, crowds also returned to Shanghai’s Middle Urumqi Road for his second day, tearing down pandemic barricades in Wuhan. In a very brave act that appeared to show the extent of people’s desperation, crowds in Shanghai called for the removal of the Communist Party and President Xi in a confrontation with police late Saturday. Do not publicly criticize the party and its leaders. “Communist Party! Resign! Xi Jinping! Resign!” In other footage, people chanted: He continued to shout, “Stop PCR testing, I want freedom!” and the slogan “Freedom! Freedom!” echoed a call made by one protester in Beijing in October.

According to a photo posted on Chinese social media, a note affixed to a lamppost on Urumqi Middle Road in Shanghai’s upscale district reads: “To our friends in Urumqi: I love you like I love this street like I love my family. November 26th and 22nd. Other photos show a candlelit gathering in a sea of ​​white candles outside a luxurious apartment on the same street “Urumqi, November 24th. May the deceased rest in peace.” Despite numerous records of police arresting protesters on Saturday, people returned to the streets of Shanghai, China’s largest city and eastern China’s global financial hub, on Sunday. In Beijing, a student from Tsinghua University told AFP that around 11:30 a.m., some students held up blank papers near the cafeteria, and by the afternoon, 200 to 300 people had attended. The blank sheet has become a symbol of burgeoning protests. According to a video shared online, protesters shouted: “This is not a normal life. Enough is enough. Our lives weren’t what they used to be.” In China, with little room for dissent under Xi Jinping, citizens are forced to speak out mainly on social media, playing a cat-and-mouse game with censorship.

At least 10 people were killed and nine others injured when a fire broke out in a residential building the day before demonstrations erupted in Urumqi, the capital of the westernmost Xinjiang Uighur Autonomous Region, on Friday. Many believe he died because he was unable to escape due to Covid restrictions, but the local government denies that claim. In Shanghai, a red signboard celebrating the 70th anniversary of the founding of the East China University of Political Science and Law was spray-painted with the message “Don’t be silent.” A memo was pasted at the entrance of the Qingdao Film Academy in eastern China. “In mourning for the burn victims of November 24. Don’t be indifferent. Don’t be silent. Don’t forget.”

China Digital Times, a US-based news site, reported that the Xi’an Academy of Fine Arts in the northwest and Sichuan Foreign Studies University in the southwest are also holding protests. Professor Chung Kim Wah, a social scientist who once worked at the Hong Kong Polytechnic University, said the protests were widespread but unlikely to threaten the central government. He expected the government to use both appeasement and crackdowns to settle grievances. “Whether anti-Chinese slogans spread will have to be watched, but Xi may shift responsibility to local governments. Because we can say there is,” he said. It refers to a government announcement on November 11th that eased some restrictions and urged local authorities to rescind indiscriminate Covid restrictions.

Share
Facebook
Twitter
Pinterest
WhatsApp
Previous article
Shocking! Varun Dhawan’s Bhediya will be leaked online on the day of its release.
Next article
World Cup 2022: ‘There is hope in Argentina with Lionel Messi’
- Advertisement -

Ajay Devgn is bullied for riding a scooter on the Bholaa...