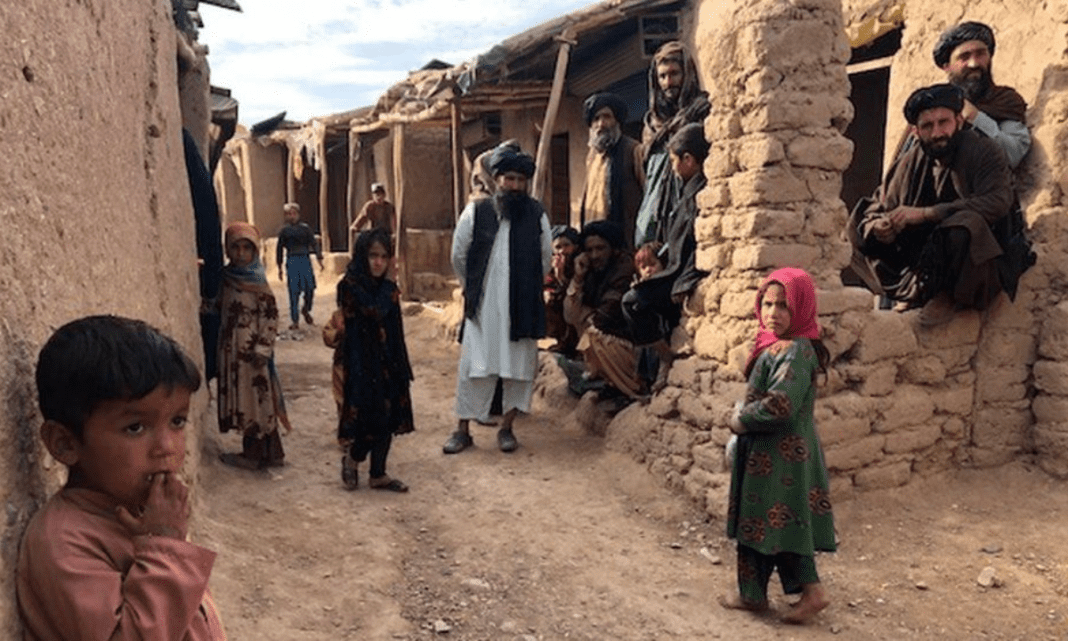 Afghans give their hungry children medicine to calm them down. Some sold their daughters and organs to survive. In his second winter, since the Taliban took power and frozen foreign funding, millions are on the brink of starvation. “Our children don’t cry, they don’t sleep, they have nothing to eat,” said Abdul Wahab. “So we go to the pharmacy, get some medicine, and give it to the kids to make them feel sleepy.” He lives in a hamlet of thousands of tiny mud houses that have grown over the decades just outside Herat, the country’s third-largest city, displaced by war and natural disasters. It’s full of devastated people. Abdul is one of a group of nearly ten men who have gathered around us. How many of us have given our children medicine to calm them down? “Many of us, all of us,” they replied.

Ghulam Hazrat felt in his tunic pocket and pulled out a piece of the pill. They are alprazolam, a tranquilizer usually prescribed to treat anxiety disorders. Gram has six children, the youngest of whom is one year old. “I will give it to him too,” he said. Others showed me escitalopram and sertraline pill strips they said they gave to children, usually prescribed to treat depression and anxiety. Doctors say such drugs, when administered to undernourished young children, can cause liver damage, along with many other problems, including chronic fatigue, sleep, and behavioral problems. It turns out that at the local pharmacy you can buy 5 tablets of the drug used for the price of 10 afghanis (about 10 cents) or a slice of bread. Most of the families we met shared a few slices of bread each day. Women ate dry bread in the morning and soaked it in water in the evening to moisten it, she said. The United Nations says a humanitarian “disaster” is currently occurring in Afghanistan. Most of the men around Herat work as day laborers. You have had a difficult life for many years.

But when the Taliban came to power last August without international recognition from the new de facto government, foreign money flowing into Afghanistan was frozen, causing an economic collapse and leaving men out of work almost every day. On the rare days when they find work, they earn about 100 Afghanis, or just over US$1 (£0.83). Everywhere I went, I saw people forced to extreme measures to save their families from starvation. Ammar (not his real name) said he had surgery to remove a kidney three months ago and he showed me a 22 cm scar (the puncture scar is still a little pink) across his front and back. rice field. He is in his 20s and the prime of his life. To protect him, we hide his identity. “There was no way around it. I heard that the local hospital could sell kidneys. I went there and told them that’s what I wanted.” A few weeks later I got a call to come to the hospital,” he said.

“They did some tests and then injected me with something that knocked me out. I was worried, but I had no other choice.” We asked Hameedullah Motawakil, a spokesman for the Taliban state government in Herat, what they are doing to combat hunger. “This situation is a result of international sanctions against Afghanistan and a freeze on Afghan assets. Our government is trying to find out how many people are in need. I am lying about my condition,” he said. It’s a stance he’s adhered to, even though he’s been told he’s seen overwhelming evidence of how dire the situation is. He also said the Taliban are looking to create jobs. “We want to open iron ore mines and gas pipeline projects.” It’s unlikely that will happen anytime soon. People said they were disappointed with the Taliban government and the international community. Hunger is a slow, silent killer, and its effects aren’t always immediately apparent. Without the world’s attention, the scale of Afghanistan’s crisis may never really become clear.