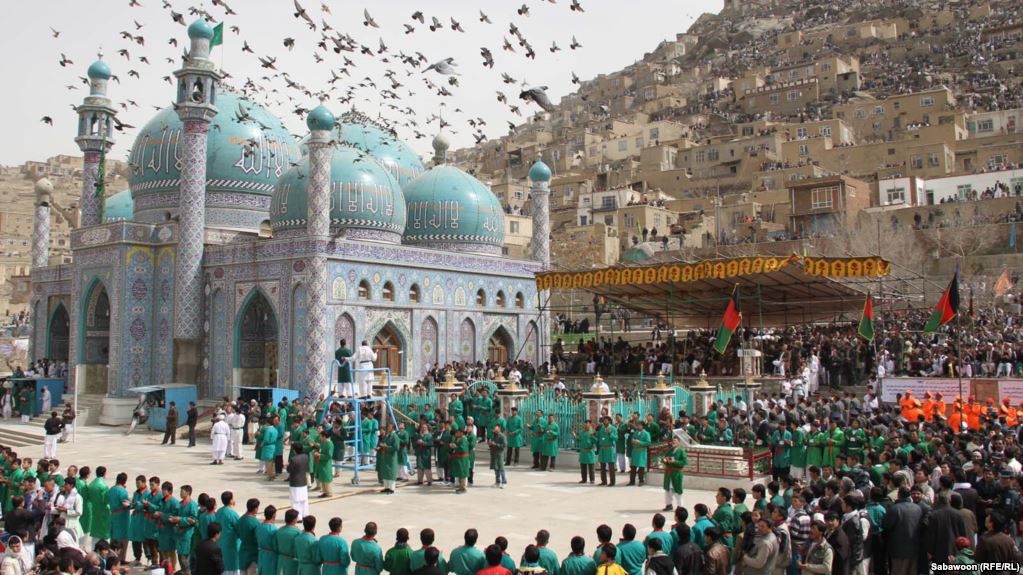 An online campaign in Afghanistan calling for the boycott of the ancient festival of Norouz has prompted a backlash among many Afghans, who have vented their exasperation at the growing influence of fundamentalist Islamic ideology in the war-torn country.

Heralding the arrival of spring, the pre-Islamic Persian new year celebration has been under constant fire from conservative Afghan clerics and militant groups that have called it un-Islamic.

The anti-Norouz campaign has distributed cartoons on social media leading up to Norouz festivities on March 20, urging people in the predominantly Muslim country not to celebrate.

Norouz is believed to have been a holiday of the Zoroastrian religion that was widespread in the region before the spread of Islam in the 7th century.It is also celebrated in Central Asia, the Caucasus, and parts of the Middle East.

One cartoon includes a man in religious clothing holding a poster that reads: “I do not celebrate Norouz.”

Beside the cartoon figure, the text reads: “This is Abdul Rahman. He does not celebrate Norouz. Abdul Rahman knows that Norouz is the Eid of Magus,” a word that refers to Zoroastrians.

The text adds that Abdul Rahman “has two Eids,” a reference to Eid al-Adha and Eid al-Fitr, the two most important festivals on the Islamic calendar. “Abdul Rahman is very smart. Be like Abdul Rahman,” the text reads.

A second cartoon has a young girl draped in black and holding a Koran, the Islamic holy book.

“This is Fatima,” reads the text. “Not only does Fatima not celebrate Norouz, but she also prevents other Muslim sisters [from doing so.] Because she knows that celebrating Norouz is an invention that promotes Zoroastrian traditions. Fatima is very cautious in matters of religious affairs.”

The cartoons have prompted an outpouring of anger at the growth of Islamic conservatism in society but has also led to a great show of support for Norouz, which is arguably the biggest day of the year for many Afghans.

Samay Hamed, a prominent cartoonist and political satirist, said on Facebook on March 9 that Abdul Rahman should “go to Saudi Arabia,” the birthplace of the extremist Wahhabi version of Islam, and perform a “sword dance for [U.S. President] Donald Trump,” who is a vocal supporter of Riyadh and took part in a traditional Saudi dance on a visit there in 2017.

“Instead of celebrating and being happy, people like Abdul Rahman are becoming suicide bombers and killing peoples’ families,” wrote Habib Mohammadi, a Kabul resident, on Facebook on March 10, in a reference to the radical ideology of militant groups like the extremist Taliban and the Islamic State groups that are fighting Afghan forces.

During its draconian rule from 1996 to 2001, the Taliban officially banned Norouz.

But the spirit of Norouz was so strong among Afghans that they continued to celebrate it discreetly at home, risking beatings and imprisonment.

Norouz was reinstated as an official holiday after the fall of the Taliban in 2001.

Taliban militants have issued periodic warnings against the observance of the holiday, and authorities have been constantly on the watch against possible bomb attacks during massive Norouz gatherings in Kabul and the northern city of Mazar-e Sharif.

“The influence of extremist groups like the Taliban and Islamic State and the spread of fundamentalist ideas has led some small sections of society to oppose national celebrations like Norouz,” Ali Amiri, a university lecturer in Kabul, told RFE/RL’s Radio Free Afghanistan.

“The inhabitants of this land have been celebrating Norouz for thousands of years,” he told Radio Free Afghanistan. “It is a national and cultural day, and opposition to Norouz is illogical.”

Norouz is observed with a public holiday on March 20-21 in Afghanistan, but many people extend their celebrations for up to two weeks.

Festivities include planting flowers, congregating at mosques, attending games of the traditional buzkashi sport, and eating specific foods and fruits that represent the coming of spring.