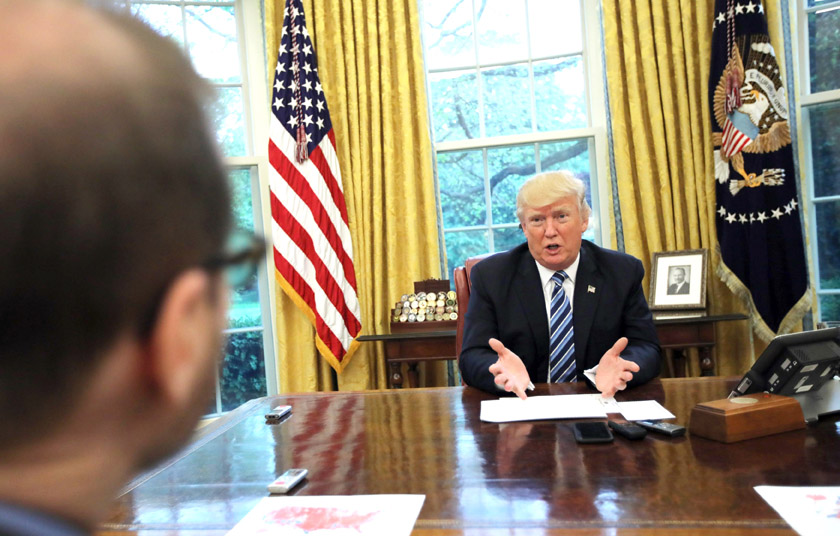 WASHINGTON (Reuters) – U.S. President Donald Trump told Reuters on Thursday he will either renegotiate or terminate what he called a “horrible” free trade deal with South Korea and said Seoul should pay for a U.S. anti-missile system that he priced at $1 billion.

In an interview with Reuters, Trump called the five-year-old trade pact with South Korea “unacceptable” and said it would be targeted for renegotiation after his administration completes a revamp of the North American Free Trade Agreement (NAFTA) with Canada and Mexico.

He blamed the U.S.-Korean trade deal, known as KORUS, on his 2016 Democratic presidential election opponent, Hillary Clinton, who as secretary of state promoted the final version of the trade pact before its approval by Congress in 2011.

“It is unacceptable, it is a horrible deal made by Hillary,” the Republican Trump said. “It’s a horrible deal, and we are going to renegotiate that deal or terminate it.”

Asked when he would announce his intention to renegotiate the deal, Trump said: “Very soon. I’m announcing it now.”

Trump’s comments stunned South Korean financial markets, sending Seoul stocks and the won currency into reverse even as the country’s economic outlook has started to brighten.

South Korea’s foreign ministry said Seoul would continue to explain to the Trump administration the benefits of the free trade deal. Washington had not officially filed a request to Seoul to renegotiate the agreement, it said.

“Our government will keep monitoring the situation and continue our efforts to explain to the United States the mutually reciprocal outcome of the South Korea-U.S. FTA, while preparing for countermeasures,” the ministry said.

With global demand improving, exports of goods such as cars and electronics have been leading a recovery in South Korea and a number of other trade-reliant Asian economies such as Japan and Taiwan, boosting their manufacturing sectors.

“Talk and actual policy are different,” a high-ranking official at South Korea’s finance ministry, who declined to be identified as he is not authorized to speak to the media, told Reuters.

Trump said the Terminal High-Altitude Area Defense (THAAD) missile system now being deployed in South Korea to defend against a potential missile attack from North Korea would cost about $1 billion and questioned why the United States was paying for it.

“I informed South Korea it would be appropriate if they paid. It’s a billion-dollar system,” Trump said. “It’s phenomenal, shoots missiles right out of the sky.”

Asked about the remarks, South Korea’s defence ministry said in a statement there was no change to the existing agreement that Seoul provides land for the deployment while Washington shoulders the cost of installing and operating the system.

Moon Jae-in, the South Korean presidential frontrunner, said the new government should given the choice to decide whether to agree to the deployment.

“I’ll decide after sufficient public consensus and parliamentary approval,” he said at a televised presidential debate ahead of the May 9 election.

His top foreign policy adviser earlier told Reuters that Trump’s suggestion would be an “impossible option” because the U.S. military operates the system.

The U.S. military started the deployment of THAAD in early March, despite strong opposition from China, which worries the system’s powerful radar can be used to spy into its territory.

Lockheed Martin Corp is the prime contractor for the THAAD system.

A former U.S. State Department official estimated the cost of the system at about $1.2 billion but said the United States would not want to sell THAAD to Seoul.

“We want to retain THAAD in our arsenal, consistent with all other U.S. weapons systems deployed on the Korean peninsula. We own them. We retain them. We have the right to redeploy them,” the official said, speaking on condition of anonymity.