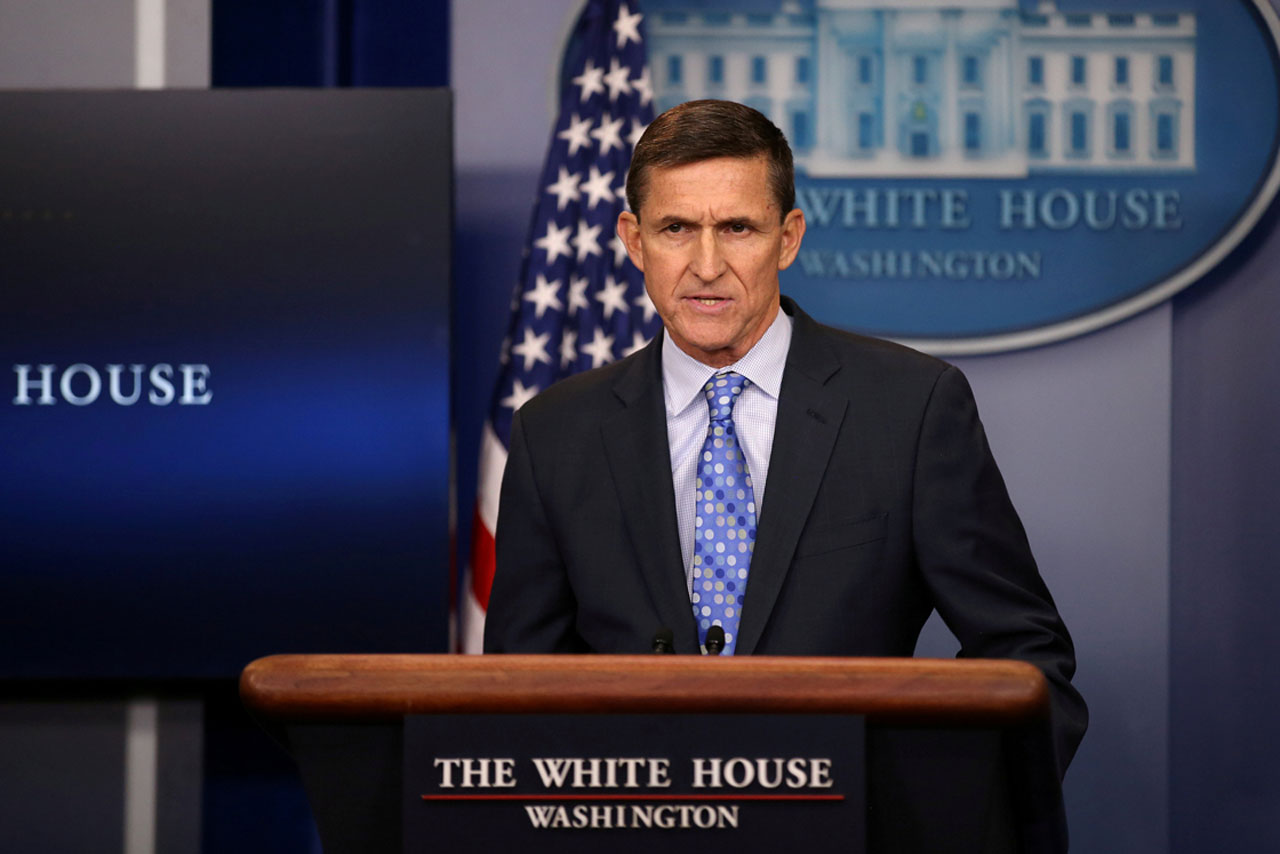 By Steve Holland and John Walcott

WASHINGTON (Reuters) – President Donald Trump’s national security adviser, Michael Flynn, resigned late on Monday after revelations that he had discussed U.S. sanctions on Russia with the Russian ambassador to the United States before Trump took office and misled Vice President Mike Pence about the conversations.

Flynn’s resignation came hours after it was reported that the Justice Department had warned the White House weeks ago that Flynn could be vulnerable to blackmail for contacts with Russian ambassador Sergey Kislyak before Trump took power on Jan. 20.

Flynn’s departure was a sobering development in Trump’s young presidency, a 24-day period during which his White House has been repeatedly distracted by miscues and internal dramas.

The departure could slow Trump’s bid to warm up relations with Russian President Vladimir Putin.

[ngg_images source=”galleries” container_ids=”9″ sortorder=”123,124,122,121″ display_type=”photocrati-nextgen_basic_imagebrowser” ajax_pagination=”1″ order_by=”sortorder” order_direction=”ASC” returns=”included” maximum_entity_count=”500″]Flynn submitted his resignation hours after Trump, through a spokesman, pointedly declined to publicly back Flynn, saying he was reviewing the situation and talking to Pence.

Flynn had promised Pence he had not discussed U.S. sanctions with the Russians, but transcripts of intercepted communications, described by U.S. officials, showed that the subject had come up in conversations between him and the Russian ambassador.

Such contacts could potentially be in violation of a law banning private citizens from engaging in foreign policy, known as the Logan Act.

Pence had defended Flynn in television interviews and was described by administration officials as upset about being misled.

“Unfortunately, because of the fast pace of events, I inadvertently briefed the vice president-elect and others with incomplete information regarding my phone calls with the Russian ambassador. I have sincerely apologised to the president and the vice president, and they have accepted my apology,” Flynn said in his resignation letter.

Retired General Keith Kellogg, who has been chief of staff of the White House National Security Council, was named the acting national security adviser while Trump determines who should fill the position.

Kellogg, retired General David Petraeus, a former CIA director, and Robert Harward, a former deputy commander of U.S. Central Command, are under consideration for the position, a White House official said. Harward was described by officials as the leading candidate.

A U.S. official confirmed a Washington Post report that Sally Yates, the then-acting U.S. attorney general, told the White House late last month that she believed Flynn had misled them about the nature of his communications with the Russian ambassador.

She said Flynn might have put himself in a compromising position, possibly leaving himself vulnerable to blackmail, the official said. Yates was later fired for opposing Trump’s temporary entry ban for people from seven mostly Muslim nations.

A U.S. official, describing the intercepted communications, said Flynn did not make any promises about lifting the sanctions.

But he did indicate that sanctions imposed by President Barack Obama on Russia for its Ukraine incursion “would not necessarily carry over to an administration seeking to improve relations between the U.S. and Russia,” the official said.

Flynn, a retired U.S. Army lieutenant general, was an early supporter of Trump and shares his interest in shaking up the establishment in Washington. He frequently raised eyebrows among Washington’s foreign policy establishment for trying to persuade Trump to warm up U.S. relations with Russia.

A U.S. official said Flynn’s departure, coupled with Russia’s aggression in Ukraine and Syria and Republican congressional opposition to removing sanctions on Russia, removes Trump’s most ardent advocate of taking a softer line towards Putin.

Another official said Flynn’s departure may strengthen the hands of some cabinet secretaries, including Defense Secretary Jim Mattis and Secretary of State Rex Tillerson.

However, the second official said, Flynn’s exit could also reinforce the power of presidential aides Steve Bannon and

Stephen Miller, whom he described as already having the president’s ear.

Congressional Democrats expressed alarm at the developments surrounding Flynn and called for a classified briefing by administration officials to explain what had happened.

“We are communicating this request to the Department of Justice and FBI this evening,” said Democratic representatives John Conyers of Michigan and Elijah Cummings of Maryland.

Intelligence, said Flynn’s departure does not end the questions over his contacts with the Russians.

“The Trump administration has yet to be forthcoming about who was aware of Flynn’s conversations with the ambassador and whether he was acting on the instructions of the president or any other officials, or with their knowledge,” Schiff said.

“Washington D.C. can be a rough town for honourable people, and Flynn who has always been a soldier, not a politician deserves America’s gratitude and respect,” he said.

Anticipating an executive order from the White House to temporarily shut off Iranians' access to...