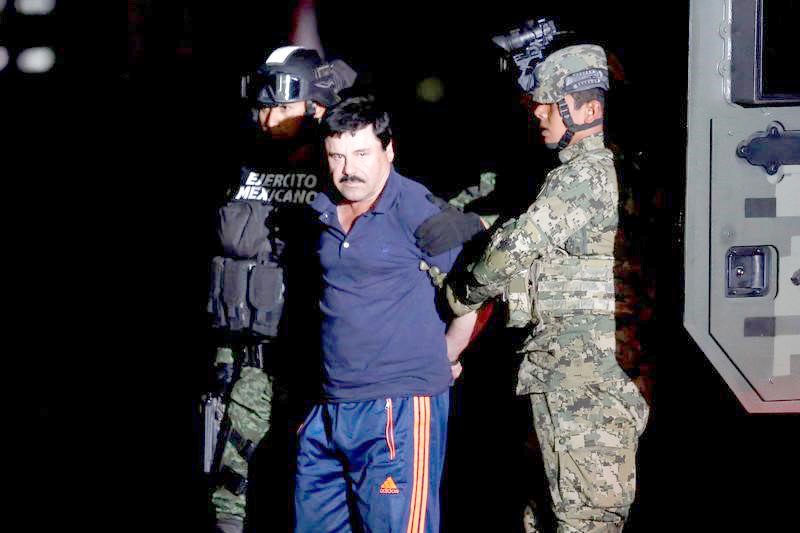 By Julian Cardona and Jonathan Allen

Mexican officials said the timing of the move was both a last-minute gift to outgoing U.S. President Barack Obama and an olive branch to Trump, who has regularly insulted Mexico and threatened to tear up the NAFTA trade agreement that underpins its economy.

Guzman, 59, arrived in a small jet at Long Island’s MacArthur Airport after nightfall and left in a column of vehicles. Later a police convoy believed to be carrying the kingpin arrived at Manhattan’s Metropolitan Correctional Centre, a maximum-security federal prison, with helicopters swooping overhead.

At least three female inmates chanted “Chapo! Chapo!” at the top of their voices from their barred cell window.

One of the world’s most wanted drug kingpins until he was captured a year ago, Guzman busted out of a high-security penitentiary in central Mexico six months earlier through a mile-long tunnel, his second dramatic prison escape.

After Guzman slipped out of his cell through a tunnel fitted with a motorbike on rails in July 2015, Trump said on Twitter he “would kick his ass” as president.

The extradition of El Chapo, or Shorty, followed a federal court decision on Thursday rejecting a legal challenge by his lawyers against extradition. It came 16 years to the day after the first jail break, removing the lingering fear he would again outsmart the Mexican government.

Alberto Elias Beltran, Mexico’s assistant attorney general for international affairs, denied the extradition had anything to do with Trump’s inauguration and said one day Guzman would face justice at home.

“When he finishes his sentence in the United States he will return to Mexico,” where he has 10 pending cases, Beltran said.

Guzman’s stays in Mexico’s corrupt prisons did little to crimp the power of his Sinaloa Cartel that U.S. anti-drug officials consider responsible for much of the narcotic distribution in the United States. It is expected he will have less access to his network from a U.S. jail.

The man who Forbes in 2012 included on its world’s billionaires list was widely believed to exert influence from his cell during his previous incarcerations. In the past year, however, he had complained of harsh treatment and solitary confinement.

Guzman is charged in six separate indictments throughout the United States. The accusations range from money laundering to drug trafficking, kidnapping and murder in cities that include Chicago, Miami and New York.

His career began in the opium and cannabis-farming hills of the northern state of Sinaloa but he grew to oversee perhaps the world’s largest transnational cocaine, heroin and methamphetamine smuggling organisation reaching Europe and Asia.

Guzman earned almost legendary status as an outlaw, but his ambition to control more trafficking routes was a key dynamic in Mexico’s decade-long drug war that left more than 100,000 dead and from which his organisation emerged scarred but mostly victorious.

He was being held in a prison just across the border from El Paso, Texas in Ciudad Juarez, Chihuahua, where his Sinaloa cartel beat the rival Juarez cartel into submission with such violence than tens of thousands fled the city.

The U.S. Justice Department thanked Mexico for “extensive cooperation and assistance in securing the extradition of Guzman Loera to the United States.”

Juan Pablo Badillo, a lawyer for the smuggler, said he was surprised at the extradition and said four appeals were outstanding against Guzman’s extradition.

“The transfer is not in line with the law,” Badillo said. Another of Guzman’s lawyers, Jose Refugio Rodriguez, said he was waiting at the Ciudad Juarez prison to visit his client when he learned of the decision.

A Mexican official said the move showed goodwill to Trump in sending a source of such valuable information on the criminal underworld to the United States.

Mexico is expecting to have to negotiate hard to limit the economic pain of Trump’s protectionist policies, and is sending its foreign minister to meet his aides next week.

“For mutual benefit they preferred to do (the extradition) now, and not leave it open for the future, because they really don’t know what will happen after tomorrow,” said Eduardo Guerrero, director of Lantia Consultores.

However, Mike Vigil, a former DEA chief of international operations, said the Mexican government sped up Guzman’s extradition so Trump would not be able to claim the victory as his own.

“The last thing they wanted was for Trump to take credit for Chapo Guzmanâ€™s extradition,” Vigil said.

The Mexican court system said in a statement Guzman would be tried in Texas and California, as he faces charges in El Paso and San Diego.

Regardless of whether the move was a gift for Obama, Trump or both, many in both countries will be relieved to have him in the tougher U.S. prison system.

“It’s a good thing to finally get him to the U.S. side,” said a senior U.S. law enforcement official based in Mexico.