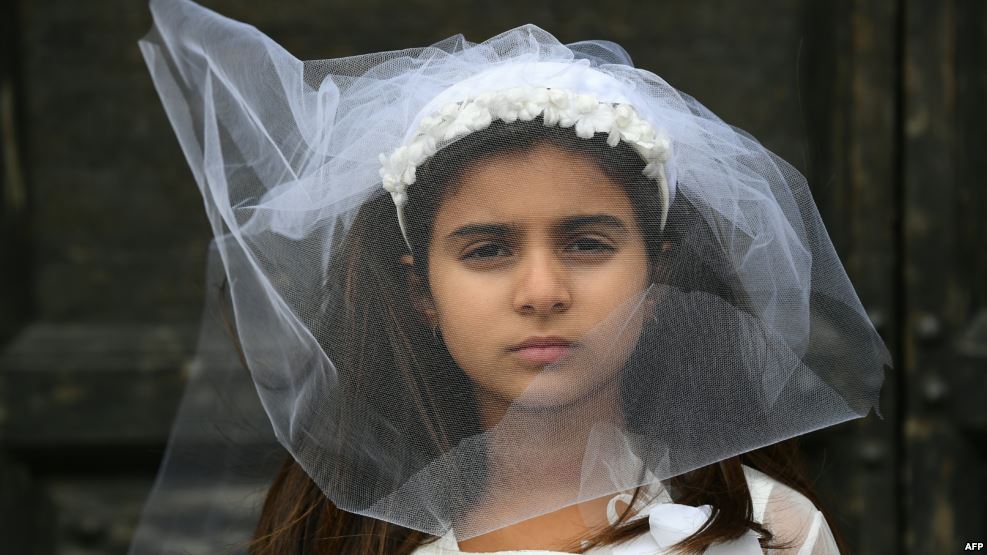 At first, it sounds like a charming love story: Playmates who grow up side by side in an Iranian village go on to get married.

“It was nighttime and I was asleep. My neighbors rang the doorbell and came in and put a ring on my finger,” Leila, whose name has been changed to protect her privacy, told RFE/RL’s Radio Farda in an interview. “That’s how I got married.”

At 22, Leila has been married more than half her life. In a way, she’s not alone. There are tens of thousands of child brides in Iran, where the legal age of marriage for girls is 13 with parental consent — and girls even younger can be married with permission from a judge. For boys, the age is 15.

The National Organization for Civil Registration statistics registered 37,000 underage marriages in the Islamic republic in the last Iranian year, which ended in March. The real number could be even higher, as many families reportedly don’t register underage marriages.

Leila, who lives with Ali in his parents’ house, said that many girls in their village in East Azerbaijan Province are forced into marriage by their parents at around 10.
But that does not mean she was ready for it.

“I didn’t know what I was doing. I remember well, my hands were shaking,” she said, adding that the 15-year-old groom “seemed to be very confident.”

“He wasn’t afraid at all. But I was very afraid,” she said.

She said she has little memory of her wedding day, but that it seemed like a game. Once the ceremony was over, all she wanted was to go home to her mother and her life.

“I wanted to tell Ali that the game was over. Let’s go to sleep and tomorrow I would go back to my mother’s house and help her with sewing,” she said.

But her nightmare had just started. Ali was determined to consummate the marriage.

At 10, Leila had not reached puberty, and she said her first sexual intercourse was a very painful experience.

“Even now as I talk about it, my hands are shaking. You can’t imagine how hard it was for me,” she said.

The next day, she saw a doctor, who tried to comfort her but did nothing to protect her from further abuse.

“She said it was hard at first but that I would get well later,” Leila recalled. “She said I shouldn’t worry if I bleed again after sleeping with my husband.”

“These things happen,” she says she was told.

In fact, they happen a lot — and the United Nations wants it to stop.

The UN Committee on the Rights of the Child warned this year that the number of child brides in Iran is increasing and called on the Islamic country to change laws that allow girls as young as 9 to be married.

Independent experts who reviewed Iran and other countries for the child rights watchdog expressed deep concern that Iran “allows sexual intercourse with girls as young as 9 lunar years and that other forms of sexual abuse of…young children is not criminalized.”

Tehran must “repeal all provisions that authorize, condone, or lead to child sexual abuse,” the UN committee said. It called for the age of sexual consent to be increased from 9 years old to 16.

Globally, a girl under 15 is forced into marriage every seven seconds and many 10-year-old girls are forced to marry, according to a report released in October that was based on UNICEF statistics.

Tehran-based sociologist Mostafa Eghlima believes a lack of social progress and the traditional rural fabric of the country contributes to the high number of child marriages in Iran.

“People living in small towns are poor. They don’t care if their daughters are 8 or 9 years old. They marry them off. Usually the husbands are young, too. They are 18, 15, or 16,” Eghlima said.

Mojgan Kahen, a child psychologist based in Belgium, said that child brides are likely to suffer from psychological problems.

“A side-effect is that the person will live in constant fear,” Kahen said in a telephone interview.

(BPT) - Holiday gatherings and backyard barbecues have a lot in common as they are...