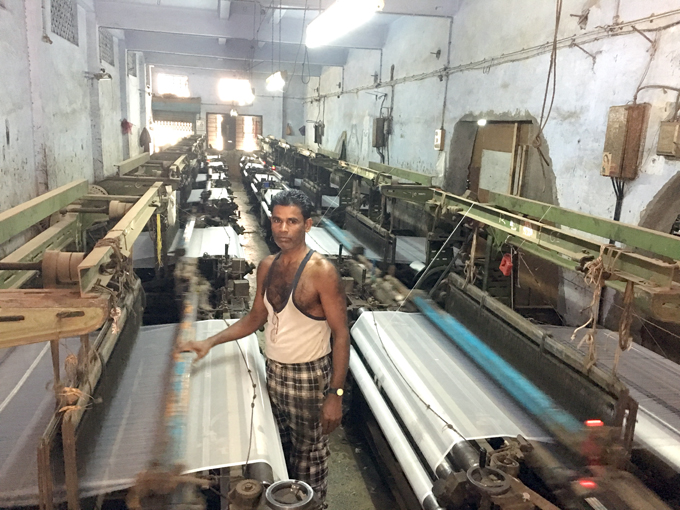 SURAT, India (Thomson Reuters Foundation) – Udhiya Behera sat in a windowless room in the Indian textile hub of Surat, staring blankly at a small television as the ground shook with the noise of power looms on the floor below.

For Behera, though, this was a moment of late-evening calm in a room he shares with 35 others, just off a lane crammed with frenetic, sleepless looms.

“I operate 12 power looms through the day and the sound bothers me a lot. My head hurts,” Behera, 45, told the Thomson Reuters Foundation, speaking loudly to be heard over the din that enveloped the room. “It is quieter here.”

Nearly 8 million people, mostly migrants from the eastern state of Odisha, like Behera, work on 600,000 power looms in the Western city of Surat in conditions that damage their hearing and often ruin their health.

While the workers said they choose to work here due to a lack of jobs at home, campaigners also suspect that some are trafficked across India.

“The older workers become the recruiters. These are poor people hit by crop failure and cyclones and need work,” said Umi Daniel, a migrant rights activist with Aide et Action in Odisha.

The fabric they weave is durable, easy to care for and low cost, which has led to its popularity in both the Indian and international markets.

India exports $6 billion worth of synthetic fabric per year. This is used worldwide – in Europe and the United States for “wrinkle-free” school and hotel uniforms, and by the garment hubs of Bangladesh and Vietnam in high-street fashion.

Textile weavers are exposed to around 102-104 decibels of sound according to a study by India’s National Institute of Occupational Health, much more than the legally permissible 90 decibels and putting them at severe risk of hearing damage.Sanjay Patel of migrant labour rights group Aajeevika Bureau said: “Those working here for 10 to 12 years are not able to hear well. Many are unable to work beyond the age of 45, and return to their villages.”

Patel said that many mill units do not fulfil basic safety guidelines such as giving out ear plugs.

Most units register as shops or other establishments rather than factories, which would mandate them to limit exposure to high noise levels to eight hours and pay extra for overtime.

Yet labour department and local government officials said they had not received any noise-related complaints from workers.

“We only get complaints of non-payment of wages that we settle,” said P.D. Patel, an inspector with Surat’s civic body, which is responsible for checking the units.

The penalties for exploitation offer little deterrent however. Nearly 200 employers were penalised with fines between 25 and 750 rupees ($0.40 to $11.60) in 2016 for violating guidelines on work hours or not giving lunch breaks, Patel said.

Bikes, trucks, vans and cars ferrying around colourful fabrics are a common sight on Surat’s streets.

But just a few miles from the bright, bustling markets are soot-covered buildings, surrounded by piles of rotting waste and filth, where the workers live.

Poor nutrition, a lack of basic hygiene, long work hours and unsafe sexual habits have made thousands vulnerable to a cocktail of diseases – from HIV/AIDS to tuberculosis.

A local government office in Surat has received more than 40 death compensation applications from families of power loom workers over the last two years.

“The deaths were recorded as natural. Those who died were in the 40-59 age group,” an official said.

Officials in Surat said most cases of tuberculosis involve migrant workers, who work on the looms until they fall ill.

“There are no deaths in the power loom units. They occur only when workers go back home,” said Gagan Sahu, a professor at South Gujarat University and textile industry specialist.

When Vipra Padhyali, 40, started work in a loom unit 25 years ago, he worked four machines and found it manageable.

“But about a decade ago, they told me if I operated more machines, I would produce more cloth and earn more money. So I agreed,” Padhyali said, who now walks up and down all day between the 12 looms that he operates.

“When I worked on three machines, I was paid 80 paisa ($0.01) per metre, but when they increased my machines to six, they cut the price to 70 paisa,” said Debakar Behera, who is also a migrant from Odisha.

Debakar quit and he now drives an auto rickshaw. But most people cling to their jobs out of desperation.

“We found workers who had worked 72 hours at a stretch as they were covering for an unwell friend or a roommate,” said Sahu. “Workers hardly have any bargaining power – their payments, working hours and living arrangements are compromised. They are leading miserable lives.”

Officials said power looms without shuttles, which generate much less noise and produce better quality fabric, are available but are unaffordable to most unit owners.

Padhyali blames his work for hearing loss and constant exhaustion. “I cannot sit as I have to ensure the thread on all the machines remains straight, that there is no fold in the fabric,” he said.

In his dim room, surrounded by images of Indian gods that he prays to daily, Behera said he longs to go home to his village healthy, find work and escape the numbing sound of this life.