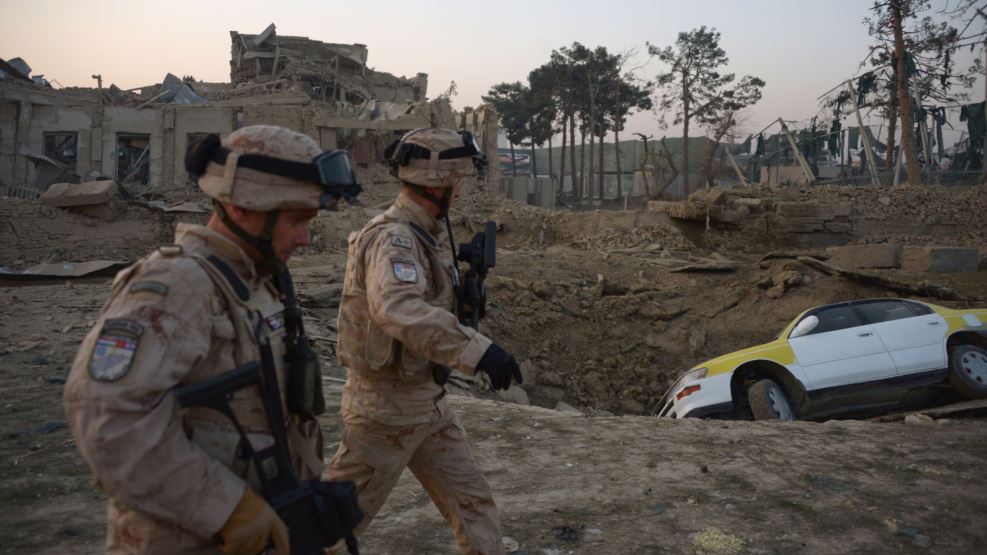 A Taliban suicide bomber drove a truck loaded with explosives into the German Consulate in northern Afghanistan, killing at least six people and wounding more than 100.

The truck exploded at the entrance of the consulate in the city of Mazar-e Sharif, destroying the gate and wall just before midnight on November 10.

A spokesman for the German Foreign Ministry said on November 11 that all of its two dozen staff escaped the attack “safe and uninjured” and were evacuated, while Afghan security forces and NATO special forces had “repulsed the heavily armed attackers.”

The Taliban claimed responsibility for the attack, saying it was revenge for U.S. air strikes last week that killed 32 civilians near the northern city of Kunduz.

President Ashraf Ghani called the attack a “crime against humanity and all international laws.”

A spokesman for the governor of Balkh Province told RFE/RL’s Afghan Service that the suicide bomb blast made a large hole in the compound wall and other Taliban fighters tried to enter the compound through the gap.

But he said security forces at the consulate prevented militants from storming inside the compound.

He added that at least 128 others were wounded, some of them critically and many with shrapnel injuries.

Witnesses said many of the injured were Afghans who were sleeping in their homes nearby and were struck by flying glass when their windows were shattered by the massive explosion.

Many nearby houses and shops were destroyed or damaged in the huge blast.

The heavily protected German Consulate is located in a large building close to the famous Blue Mosque in the center of Mazar-e Sharif, where the Indian Consulate was also attacked by militants earlier this year.

The Taliban statement from spokesman Zabihullah Mujahid said the attack was in retaliation for November 3 air strikes in the Buz-e-Kandahari area of Kunduz that killed dozens of people, the vast majority of them women and children.

NATO, the United Nations, and the Afghan government are investigating the attack, which prompted angry protests in Kunduz.

In Berlin, officials said a crisis task-force meeting was called at Germany’s Foreign Ministry to review events surrounding the attack.

Germany has almost 1,000 soldiers deployed in Afghanistan, most of them in Balkh, of which Mazar-e Sharif is the capital, as part of NATO’s Resolute Support mission.

In the past several years, attacks have increased in northern Afghanistan, which for years was relatively peaceful.

Taliban militants have overrun dozens of districts in the region and last year seized Kunduz city, the first major city the group captured since the U.S.-led invasion in 2001.

With additional reporting by Reuters, AP, dpa, and AFP